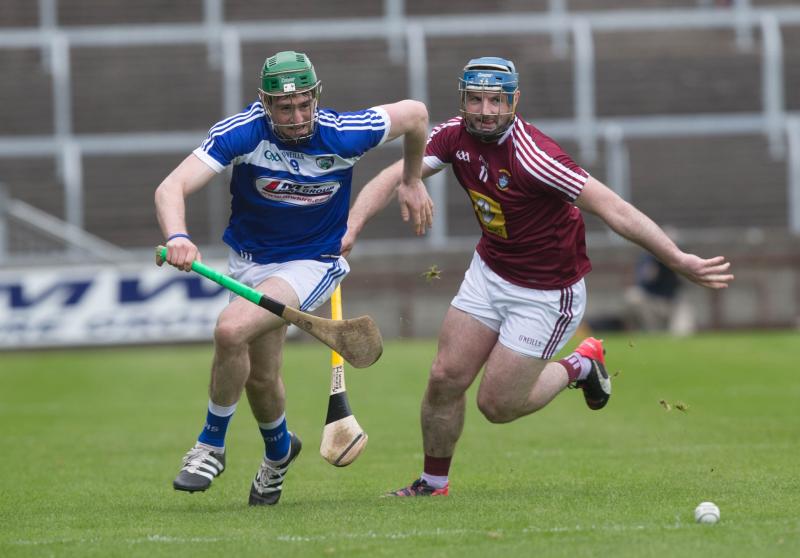 Paddy Purcell on the attack for Laois against Westmeath. Pic: Alf Harvey.

Laois suffered a disappointing three point defeat to Westmeath in their Joe McDonagh Cup opener on Saturday in O'Moore Park.

Eamonn Kelly's charges could have no complaints, as they failed to match the hunger shown by their opponents for most of the game, and have now left themselves with little margin for error for the rest of the competition.

Laois were lethargic for the opening twenty minutes or so, and Westmeath lead the early charge. Ross King (free) and Neil Foyle had given the hosts an early lead, as they pointed either side of Robbie Greville effort, but Westmeath struck for a goal moments later.

Robbie Greville ghosted in behind Leigh Bergin and claimed a long ball forward, and duly found the bottom corner. Laois reacted by hitting two points to draw level, through Paddy Purcell and King, but it was Westmeath who were playing the better hurling.

They should have been further ahead, but some poor shooting kept stunting their momentum, and they had registered six wides by the twelfth minute.

Westmeath did go back in front, however, when Cormac Boyle landed a good score, and Niall O'Brien and Eoin Price left the goal between them at the mid-point of the half. Laois were really struggling, lacking any kind of urgency, and Westmeath were full value for their lead.

They maintained a three point lead until Laois finally found another gear. Ben Conroy and Cha Dwyer pointed to lift their spirits, and then a Ross King free got them within one. With confidence returning, Cha Dwyer then fired for goal from 20 yards out, and despite Paddy Carroll making a brilliant save Neil Foyle was on hand to tap home the rebound.

Laois made the most of their recovery, and King, Aidan Corby and Dwyer all pointed again before the break to see them lead 1-13 to 1-10 at half time.

Westmeath needed to start the second half strongly, and that's exactly what they did, as they were back level within 30 seconds thanks to a goal from sub Niall Mitchell. Anghus Clarke then pointed twice, either side of a Ross King 65, and Westmeath had now wrestled back control of the game.

Laois kept plugging away, getting within one, but Westmeath had a response every time, and with less than ten minutes to go they lead by three, 2-18 to 1-18.

Much as in the first half, Laois eventually found another gear, and points from Matthew Whelan, Ross King (free) and Cha Dwyer had them back level with five minutes left.

That ratcheted up the tension, and the closing minutes were a frantic affair as both teams went in search of a winner. It was Westmeath who struck first, as Derek McNicholas landed a huge free from inside his own half.

Laois looked for a reply but couldn't find one, and Robbie Greville and Niall O'Brien (free) wrapped up the win for Westmeath.