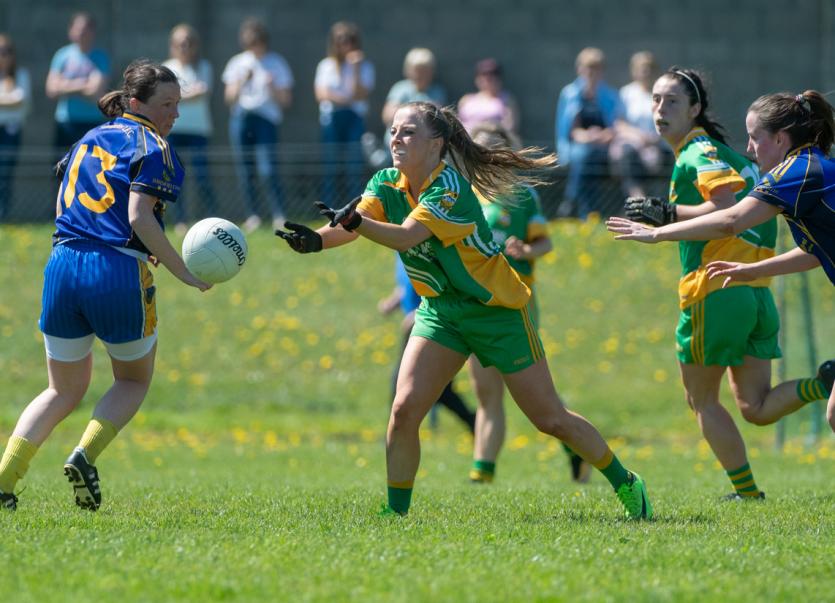 Sarsfields, county champions for the last five years, started the current Laois Ladies Senior season with a big win over Park-Ratheniska in Mountmellick on Sunday.

The emphatic nature of the victory would seem to indicate that they have no intention of surrendering their crown without a fight, or making life easy for other likely contenders.

The scoreline doesn’t tell the full story however, as it was a game of swaying fortunes during which the losers also held the whip hand for short periods, but in the end the experience of Sarsfields proved decisive and they finished the game very much in control, as the Ratheniska challenge faded.

The visitors came into the game with high hopes, on the back of two impressive League wins over St Brigid's and St Conleth's and, with Sarsfields short staffed, the occasion had the hallmarks of a possible ambush.

Last year's Laois Intermediate champions started well and used their superior fitness to shade the opening passages of play. After an exchange of points, an opportunistic goal by midfielder Catriona Fogarty pushed her side three points in front at the half way point.

The score was no more than Ratheniska deserved but their celebrations were short-lived as Sarsfields worked the ball up the field and Lauren Kearney finished to the net at the other less than 60 seconds later. Further goals from Kearney and Meaghan Dunne turned the game around, and Sarsfields pressed ahead to lead by 4-6 to 1-4 at the interval.

The eleven point gap probably didn’t do justice to the efforts of Ratheniska in the first 30 minutes and they quickly set about reducing the deficit on the resumption of play. Within three minutes of the restart, a goal from Lauren O’Connell followed by a point from Erone Fitzpatrick left a more manageable seven point gap.

As expected, Sarsfields wasted no time in responding to the threat. Some great work by Alison McEvoy, Ciara Burke and Emma McEvoy provided the platform for the forwards and points from Tracey Lawlor and Clare Conlon restored the half time gap.

Despite this setback, Ratheniska still refused to go away and Anna Healy, Fiona Kelly and Cathriona Fogarty led a rally which was rewarded with a goal from sub Shauna Redmond after 15 minutes.

Another point by top forward Erone Fitzpatrick completed the Park-Ratheniska scoring but Sarsfields added a goal, from Clare Conlon, and points by Lawlor and Alison McEvoy to finished off their tally.

Both teams will now play Portlaoise with the top two in the group qualifying for the semi-finals.