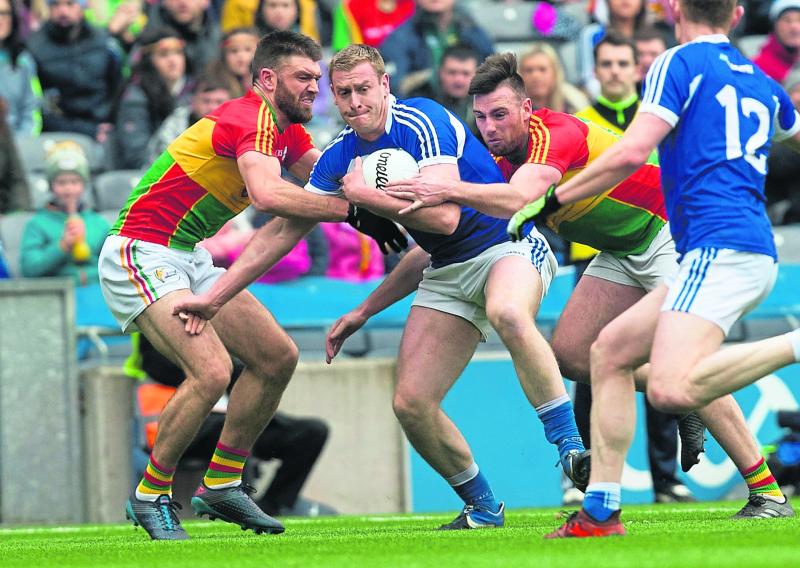 Donie Kingston in action against Carlow in the NFL Division 4 final.

For the first time in a long time, the Laois senior footballers will begin a Leinster SFC campaign with a bit of optimism swirling around the county.

After four or five years locked in a downward spiral, their Division 4 league success back in March was a welcome respite from the gloom. It was the least expected from one of the most experienced and talented squads to find themselves in the lowest tier of league football for some time, but they still delivered on that expectation, which marks a positive shift forward.

The true test of how far they have come will be measured in the coming weeks as the championship season kicks into gear. Laois have a pretty poor record in Leinster over the last few years, which is probably understating things a bit.

They have won only seven games in the Leinster SFC since 2008, and have failed to win two games in the provincial championship since their last appearance in the final, back in 2007. In three of those years, 2010, 2012 and 2013, they failed to win any game at all, so they have very little positive recent history to draw from.

What this squad have to do is start to rebuild the county's reputation brick by brick, and that is what they have done so far this year. It is a slow process, but a win over Wexford would steady their course in the right direction.

The build up to the game has been billed, on the Laois side at least, as a major step up in class, as a Division 3 team prepares to meet a Division 4 team. While that is all true, the gulf between the sides shouldn't be that big.

Wexford may have been in Division 3, but they were the worst team in it, winning just one game and getting relegated. The year before, they were in Division 4, so quality-wise, Laois should feel that they are at least on a par with them.

The doubts hanging over Laois centre on a couple of things, namely injuries and their mentality. Eoin Lowry, Evan O'Carroll and Danny O'Reilly all look set to miss the game, while Brendan Quigley could miss the rest of the year with persistent injury problems. Robbie Pigott and Colm Murphy have headed the USA for the summer, so the options for John Sugrue are restricted a little.

Luckily, his appointment prompted a huge buy-in across the county, and he has assembled as strong a squad as could be expected, so they should be in good shape to absorb those losses.

The doubts over the teams mentality have hung over them for some time, as successive bad campaigns appeared to chip away at the resolve and confidence of the group. There are signs of progress on that front too, as they were much more disciplined this year than they were last year, and they ground out some good results in Division 4.

John O'Loughlin, in his comments at a recent press night, pointed to both games against Carlow and the game against London as signs of progress. On those occasions they found themselves under the cosh, battling to keep themselves in the game. In the past, they would have folded into themselves, accepting defeat as though they had no right to fight the forces which brought it upon them.

This time, however, they dug in. It may have been against less than stellar opposition, but we are not in a position to be picky. A bit of steel may well be returning to the squad.

The worrying thing from the league was the team's propensity to switch off, or drift out of games. To an extent, they have been guilty of only doing enough to beat what's in front of them, rather than imposing themselves on games.

They were cruising against Leitrim and went to sleep in the second half, started brightly against Carlow down in Dr Cullen Park, but never really built on it. They won both those games, which is ultimately the only thing that really matters, but there were warning signs at stages in the league which means they should be cautious.

Heading down to Wexford should keep them on their toes too. Wexford are not having a good year, but Laois have never been in a position to take them for granted. They haven't met in the Leinster SFC since 2008, a game Wexford won.

Saturday night's game promises to be an intriguing affair. Laois and Wexford are in very similar positions, both overshadowed be a recent pass of high achievement, both a long way removed from those days. Saturday night offers the two counties a chance to step back towards the limelight, to remind both themselves and others that they have something to offer the footballing world.

It is a low-profile game that doesn't get any bigger for the teams involved. Laois have taken steps in the right direction so far this year, but a win on Saturday would be a real sign of a revival gathering pace.