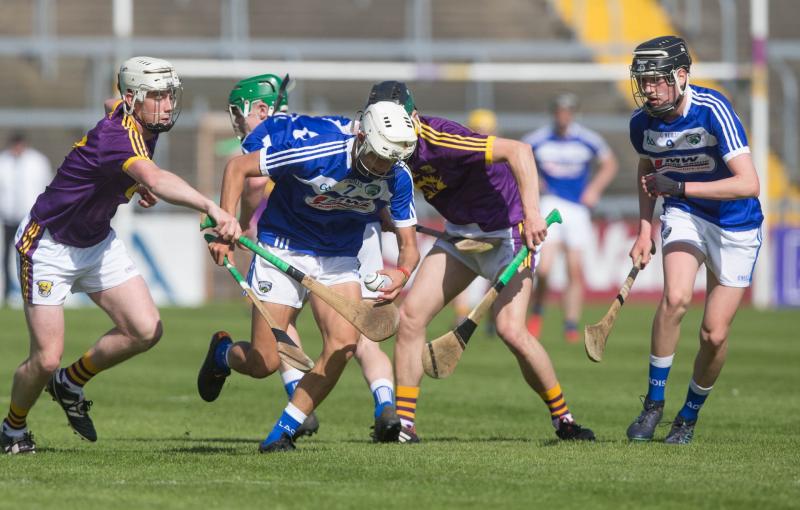 A battle display from the Laois minor hurlers came up just short against Wexford this evening, as they lost out by six points in Innovate Wexford Park.

Enda Lyons young charges were more than a match for the home side, and the final six point margin didn't come close to indicating how close this game really was.

Wexford got off to a bright start thanks to a free from the impressive AJ Redmond, but Laois wasted little time in responding, as Ciaran Byrne opened their account. Adam Kirwan then fired over a free to give Laois the lead, and it set up what proved to be an entertaining half of hurling.

Redmond drew Wexford level with another free, but from the puck out, Allan Connolly caught the high ball, offloaded to Tadhg Cuddy, and the Castletown man applied the finish. Mark Hennessy then dispossessed his marker and added another for Laois, as Enda Lyons men were rising to the occasion.

Thomas Murphy and Cathal O'Shaughnessy traded points after that, before two in a row for Wexford from Redmond (free) and Richie Lawlor leveled the scores.

Laois were undoubtedly the underdogs here, but they were bringing plenty of spirit to the occasion, not to mention skill, and the quickly retook the lead. O'Shaughnessy showed great skill to win possession and set up Adam Kirwan, before a strong run from Mark Hennessy ended in another point.

Hennessy then added another from out on the left win to see Laois lead by three with a little over fifteen minutes played.

They managed to keep their noses in front for most of the rest of the half, Conor Cosgrove and Allan Connolly chipping in with great scores, but Wexford rallied in the closing stages.

With Laois leading by two, they hit five of the last six points in the half, with Redmond again central, to take a 0-13 to 0-11 lead to the dressing rooms, and Laois were a little unlucky to find themselves behind.

Wexford pressed ahead early in the second half, with two points from placed balls by AJ Redmond for go four ahead, but Laois responded well. Cathal O'Shaughnessy won a free which Adam Kirwan pointed, and then Conor Cosgrove landed another free, from way out the field, to get the gap back to two.

Laois were given a confidence boost by those scores, and they soon drew level thanks to Tadhg Cuddy and Mark Hennessy. Redmond and Kirwan exchanged frees before Wexford then struck for a goal, as Laois missed the chance to clear their lines and were punished when Owen Whitty goaled from close range.

It was the goal that separated them now, and another couple of points apiece meant that was the way it stayed entering the last five minutes.

However, it was Wexford who had that final kick in them, and they hit the last three points to run out six point winners at the final whistle.