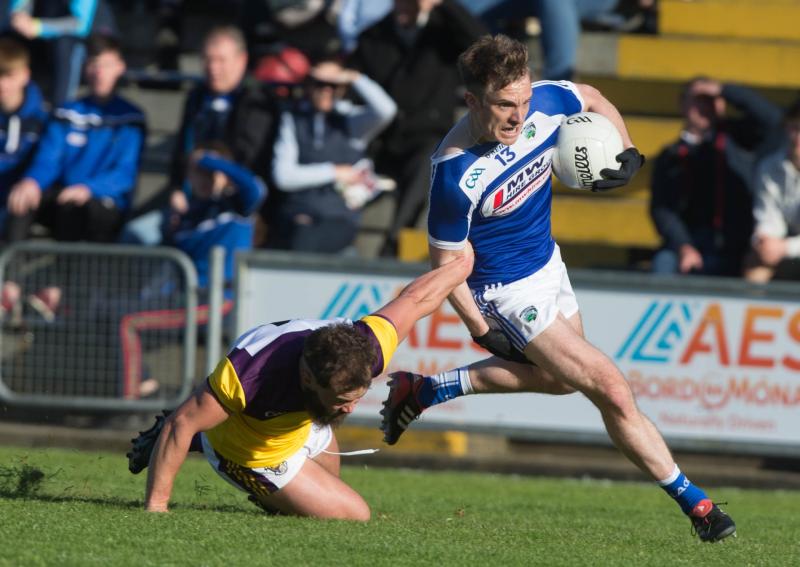 Ross Munnelly on the attack for Laois against Wexford. Pic: Alf Harvey

An epic second-half comeback from the Laois senior footballers saw them beat Wexford in their Leinster SFC opener, after extra time, in Wexford Park on Saturday night.

John Sugrue's men were ten points down after a disastrous first half and looked to be heading for an early exit, but instead staged a truly remarkable comeback in the second half. They chipped away at the Wexford lead and eventually drew level with normal time almost up thanks to a Donie Kingston penalty.

Wexford then won a penalty in the final minute of added time, which they pointed, but in a madcap end to the game, Gareth Dillon came up from corner-back to kick a last-gasp equaliser and send the game to extra time. Laois then took control, and ran out deserving winners.

Wexford served notice of their intent straight from the throw in as the won possession, broke forward, and midfielder Daithí Waters kicked a point after just 14 seconds of play.

Laois tried to hit back immediately, as Graham Brody lead the break forward and was almost played through for a one-on-one with his opposite number, but the pass was intercepted. Wexford broke forward and added a second point through John Tubritt.

A minute later they were three ahead when wing-back Glen Malone split the posts from the right wing, and the home side just kept building on their lead from there. Laois were really struggling to find any cohesion in attack, and Wexford made them pay.

With 24 minutes on the clock Laois finally opened their account with a Gary Walsh free, before a bizzare sequence of play. Stephen Attride was hauled down as he bore down on goal, but the referee opted to consult with an umpire, and then gave a hop-ball. Laois won possession, then won a free, which Ross Munnelly duly converted.

That was two in a row for Laois, and while it should have spurred them on to do better, Wexford instead hit back with interest. They broke forward at speed and put centre-back Naomhan Rossiter through on goal, and he rounded Graham Brody before tapping to the net.

James Stafford then added another point for Wexford, as they now lead by ten, but Laois hit back thanks to a Ross Munnelly free.

The final score of the half went to Wexford wing-back Shane Doyle, and that left ten between the sides at the interval, 1-10 to 0-3, as a shell-shocked Laois team made their way off the field.

Laois needed a bright start to the second half and captain Stephen Attride tried to rally his troops with a fine point from distance, and David Conway added another soon after off his left foot. Donie Kingston then added a free, and Laois had three scores in a row for the first time in the game.

Wexford then had a glorious goal chance when Tiernan Rossiter was put straight through, but Graham Brody made an outstanding save, down low to his left, to turn it out for a 45. Donal Shanley duly converted for the home side.

Laois were finally starting to hit their stride now, and Ross Munnelly added two more (one from a free), to chip away at the Wexford lead. John Tubritt responded for the hosts, but Laois were building momentum now.

Donie Kingston pointed three times on the trot to get Laois within four, and even though Shanley got another free for Wexford, Laois were on the charge now.

Paul Kingston, just introduced as a sub, kicked a lovely point from the left wing, and then Ross Munnelly added another, getting his shot away despite almost falling over. Donie Kingston then curled over a peach of a point off his left foot, and the gap was now down to just two.

John Tubritt then put Wexford three up once more ahead of a truly frantic end to the game. First, Laois won a penalty for a foul on Niall Donoher, and Donie Kingston buried it in the bottom corner to level the scores.

Kingston then missed a great chance for a winner, before Wexford broke forward and won a penalty of their won. Donal Shanley took the sensible option and pointed the score, as added time was almost up, but their was time for one last twist.

Needing a point to level it, Laois worked the ball down field and found Gareth Dillon unmarked 35 yards out, and he showed nerves of steel to curl over the equaliser. The referee blew his whistle seconds later, and off we went to extra time.

The opening period belonged to Laois, as they powered into the lead. Darren Strong put them ahead early on, and then Kieran Lillis spun away from his marker and slid a shot past Conor Swaine for a brilliant goal. Trevor Collins added a point, and Laois were now five ahead.

Donal Shanley (free) and Stephen Attride swapped points, and Laois lead 2-18 to 1-16 at the changeover.

Paul Kingston then pointed moments after the restart, as Laois now lead by six. Donal Shanley hit back for Wexford with a free, but Donie Kingston snuck a shot inside the post for Laois soon after, and the gap was back to six.

Wexford did manage one more late point, through sub Darragh Pepper, but the day belonged to Laois, as they claimed a famous, famous win.