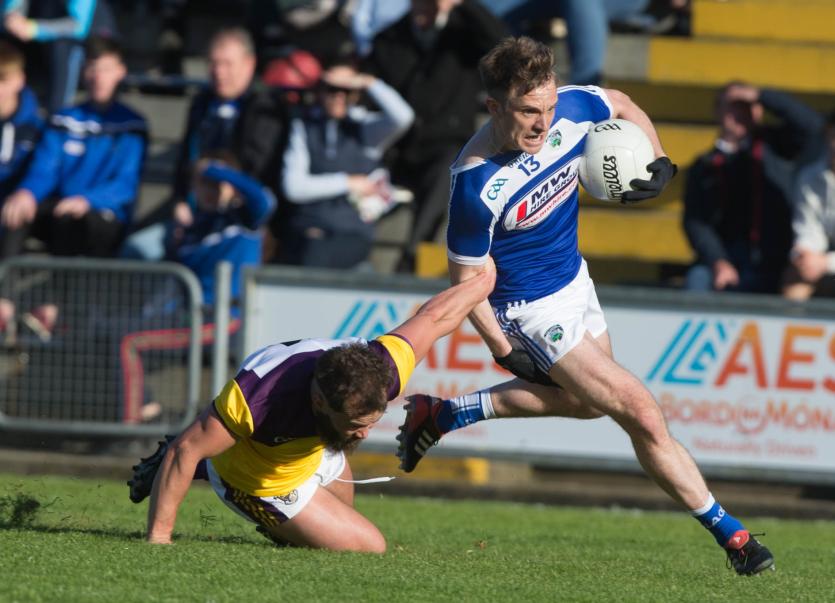 Ross Munnelly on the attack for Laois against Wexford. Pic: Alf Harvey

Ross Munnelly has been a part of some historic days in his sixteen seasons with the Laois senior footballers, but even he had to admit Saturday nigth's win was something a bit special.

The Arles-Kilcruise man was central to the Laois revival, kicking 0-5 to give his side a platform to build a meaningful assault on the Wexford lead.

When he spoke to the media after the game, he was asked if he could recall a more dramatic encounter from his days in the blue and white. "No, probably not. Offaly up in Croke Park back in 2005 was a special one, to nick it right at the end, but today I'm just proud of a group of players that dug in and never gave up.

"When they were lining up the penalty they could have put us to sleep but they didn't, they went for a safe option. When our lads got it out, with Brody, once we kept the ball in play and he (the referee) didn't blow it up, we felt it was there for us because at half time, we knew we hadn't played, we hadn't clicked.

"We knew if we kept our composure and kept tipping over points that we'd be hard to stop in the second half, because we were going to find our groove at some stage. Credit to the gaffer, credit to the management, they made some changes, I'd say probably 22 lads played today and that's brilliant for our group, we've been trying to improve all year, every game we've gone through we've gone through a different challenge.

"When it was put up to us, twice, at half time we stood there and at the very end in injury time we back ourselves, and we came out with a solid victory in the end. Was it six we won by in the end? A sixteen point turnaround from half time, we're just tremendously proud of ourselves, and again, a bit like Croke Park the last day, just giving our supporters something to be happy about, and to have a bit of belief in our county."

The difference in performance and attitude from the first half to the second half was remarkable, but Munnelly admitted it was simply down to the players accepting the challenge put before them. "You're always looking for a challenge, and the challenge was put to us there at half time.

"We had no option, we had to come out and, I won't say come out fighting, because we came out with composure in our minds. We wanted to stick to what had been working for us all year and just up our game maybe 15 or 20 percent, until the scores started coming and then once they started coming, it probably reminded us of Laois teams of old, when they were in full flight and picking off score after score, after score, after score. When we hit the front, we deserved it and we stayed going."

Had Laois not launched that comeback, they could well have seen their season unravel, but now Munnelly feels this victory can give them a big boost ahead of the clash with Westmeath in two weeks time. "Yeah of course, and it gives us a bit of confidence, and I think more so than anything else, loads of players got championship game time today, and the extra time will probably stand us in good stead, because there is going to be so much competition in training.

"That's what it's all about, it's fantastic to have that scenario in Laois at the moment, we deserved our win in the end today and we took our chances in the second half and deserved our victory. We'll get out heads right now and Westmeath are going to be a step up again, and it's up to us to rise our performance again for the next day."