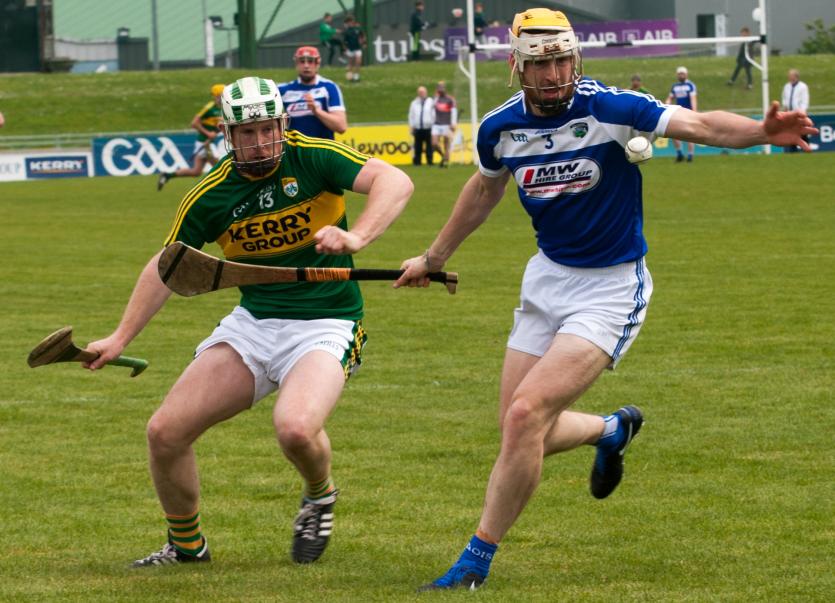 Laois senior hurlers dreams of a place in the Joe McDonagh Cup are in tatters after they slumped to a second consecutive defeat, this time to Kerry.

Eamonn Kelly's charges were completely outplayed by Kerry in Tralee, and finished with fourteen players after Padraig Lawlor was sent off in the first half. In truth, even with 15 men Laois were rarely a match for Kerry, as the promise shown in the early stages of the league has evaporated for Laois.

Hopes were high when play got under way, but Kerry quickly took control of proceedings. Jack Goulding slipped away from his marker and rifled a shot into the top corner.

Paddy Purcell landed a point from distance in response for Laois, but Shane Conway had that cancelled out moments later with a free. Laois were trying to get a toe-hold in the game, and points from Cha and Ross King (free) either side of a brilliant sideline cut from Goulding.

Another Conway free put Kerry three ahead, but King (free) and Ben Conroy to within one, but the first of a series of setbacks arrived then for Laois with Leigh Bergin went off injured. Shane Conway hit back with a Kerry free, and then Sean Weir waltzed through the defence before pointing from close range.

Willie Dunphy hit back for Laois after a good ball from Ben Conroy to find him, but Kerry had a response every time, and Conway nailed another free.

Laois were struggling for anything in the way of cohesion in the first half, while Kerry were far slicker, moving the ball with purpose and repeatedly finding men in space.

Things for worse for Laois when Lee Cleere was then forced off injured, with the full-back line now in disarray. Kerry made the most of that, and Brendan O'Leary fired in their second goal, and to compound matters, Padraig Lawlor was sent off for Laois seconds later. That meant that the entire starting Laois full-back line were no longer on the field.

Shane Nolan added a third Kerry goal moments later, and Laois now trailed by ten points at half time, 3-10 to 0-9.

Laois needed to start fast in the second half, but it was Kerry who sprung out of the blocks, and hit the first two points of the half to go twelve clear.

Ross King cancelled those out with a brace of frees, but Laois never really looked like they believed a comeback was in them, and that's exactly how the second half played out.

Any time Laois got a score, Kerry hit back and kept themselves at a comfortable distance for the remainder of the half. Ben Conroy lead what charge Laois could muster, but it was all too comfortable for Kerry in the end.