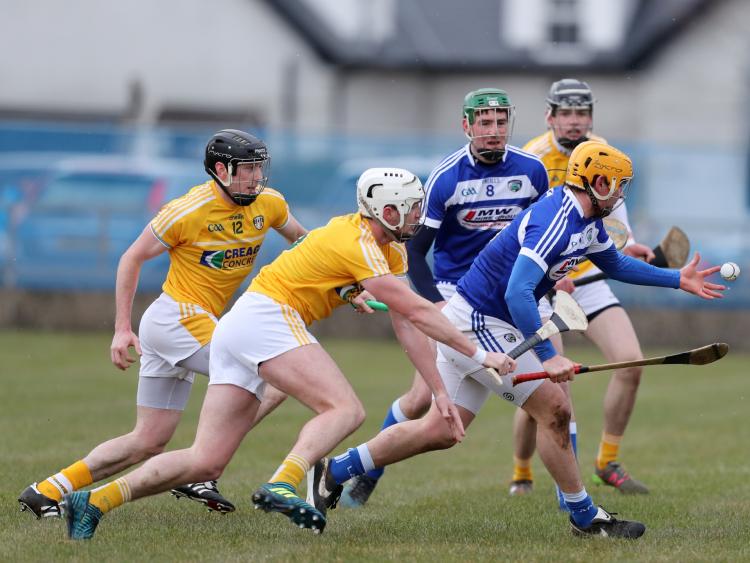 The Laois senior hurlers withheld a frantic late comeback from Antrim to secure a much-needed win over the Saffrons in their Joe McDonagh Cup clash this afternoon.

Ross King scored 0-12 and Willie Dunphy got the goal as Laois bounced back from a couple of poor performances against Westmeath and Kerry to claim the win.

Laois were lacking form coming into this game, and facing into a strong breeze, the early signs were not good. Antrim raced into a 0-4 to 0-1 lead with Neil McManus, a late introduction to the starting team, hitting two of them.

Laois eventually settled down, and two Ross King frees, coupled with a point from Paddy Purcell, had them back level by the 17th minute. King then nailed another free, and Laois were now ahead for the first time.

Eddie McCloskey and King traded points before Conor Johnston levelled the scores at 0-6 each in the 22nd minute, but Laois hit a scoring surge after that.

King pointed two frees, Cha Dwyer added one from play and Ben Conroy hit another, as Eamonn Kelly's side went four ahead. Antrim scrambled to break the momentum, introducing James McNaughton and Conor McCann, and it worked a little, as McManus pointed either side of another Ben Conroy point to leave Laois three up at the break, 0-11 to 0-8.

Understandably, Antrim came out all guns blazing on the restart and quickly cancelled out the Laois lead, as a trio of McManus frees made it 0-11 each.

However, Laois struck for a crucial score after that when Willie Dunphy reacted quickest to the ball coming back off the post by cracking a shot to the net.

McManus and King traded frees before Conor McCann and Conor Johnston got Antrim within one, but another King free gave Laois a slight bit of wiggle room.

Again McManus responded with a free, but two quick-fire points from Ben Conroy put the goal between the sides again.

Paddy Purcell and Nigel Elliott pointed to maintain the status quo, before Laois were dealt a blow when Lee Cleere was shown a red-card for a foul on Nigel Elliott. McManus pointed the free and added another to leave one in it, and Laois looked to be in real trouble.

However, Laois hauled themselves out of trouble and again King was central, as he hit three frees on the trot to push the lead out to four.

Aidan Corby soon made that five and Laois started to dream of the win, but a Ciaran Clarke goal breathed life into Antrim in injury time.

James McNaughton then made it a one-point game as Laois desperately tried to hang on for the win, and they managed to do just that to claim a priceless victory.