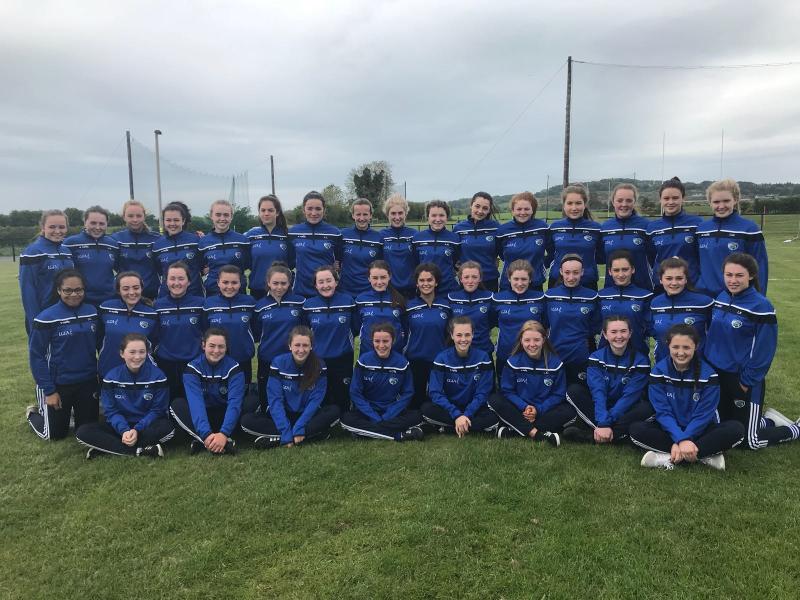 The Laois U-16 team which defeated Meath in the Leinster final.

Despite coming into this final with a 100% record, Laois would have been regarded as underdogs against a Meath team that had played all their group matches in the 'A' Division.

The Laois girls, however, produced a great display of football from beginning to end and were by no means flattered by the seven-point margin of victory.

The weather in Ballymore Eustace was mild with a breeze blowing straight down the field. Laois won the toss and decided to play against the wind. Laois started well by winning the throw-in. They worked the ball up the field and got their first score, a point from Lisa Keane.

Laois keep up the pressure and found two more points from Sarah Larkin and Della Doherty. Meath got up and running and got their first score of the game with a point. Meath won the kick out and put Laois under pressure and found the back of the Laois net. The score now was Laois 0-3 to Meath’s 1-1.

However, Meath were not to score for the remainder of the half with the Laois backs working very hard with great clearances from Ciara Byrne, Julia Cahill, Leah Kelly & Rebecca Reddin and some good goalkeeping from Nadine Dempsey.

Great work from Laois saw them score 1-2 without reply with points from Lisa Keane and Orla Hennessy, and a goal by Grace Salmon This left the score at half time Laois 1-5, Meath 1-1.

The second half started at a blistering pace with both teams going all out. Meath hit Laois with a goal in the opening minutes. Laois went down the field and kicked a point from Sarah Larkin. Meath came straight back up the field and again found the Laois net. The score now stood at Laois 1-6, Meath 2-1.

The Laois midfield was now getting the upper hand with great work from Jenny Murphy and Sarah Larkin. Laois were moving the ball very well and playing some fantastic football, resulting in scores from Emily Lacey and Grace Salmon.

Laois where starting to control the game at this stage, with Della Doherty kicking over two more points for Laois. Some great forward play by Grainne Lalor and Orla Hennessy found Della Doherty in space and she hit the back of the Meath net from 20 yards out. Laois were now in the driving seat but Meath were to come once again scoring 1-1 in a short period.

But with great defending by Sinead Farrelly and Georgina Donovan Meath where finished scoring for the day. Laois finished off with points from Emily Lacy and Ciara Byrne and a goal by Jenny Murphy to leave the final score at Laois 3-12, Meath 4-2.

Laois will now go on to represent Leinster in the All-Ireland U-16 'B' competition and can feel confident of putting on a competitive display against whoever they may meet.