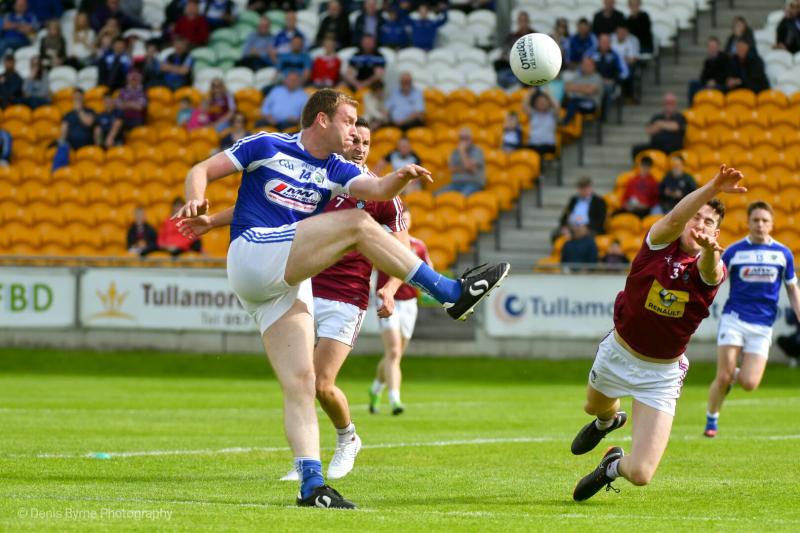 Laois senior footballers are through to their first Leinster SFC semi-final since 2009 after a Paul Kingston hat-trick saw them past Westmeath.

John Sugrue charges produced their best performance of the season to book their place in the last four, and in the process, Laois won back-to-back games in the Leinster SFC for the first time since 2007.

Laois had wind advantage in the first half, but found themselves behind early on thanks to a Westmeath point from a John Connellan free.

The Laois response came from an Alan Farrell point, after he was set up by Donie Kingston, but Westmeath were probably shading the early stages of the game. Ger Egan put them back in front and Luke Loughlin then added another soon after, as they opened up a two point gap.

Donie Kingston brought Laois back into it with a free, and the direct ball into the Arles-Killeen man was paying dividends for Laois, as Westmeath struggled to deal with his size and power.

However, at the other, they were having no such troubles, and Loughlin scored an excellent long range free after Kieran Martin opened his account, and Westmeath were now three up.

From then on, however, Laois were the better side. Ross Munnelly started the comeback with a free after a foul on Donie, and Paul Kingston then scored a lovely point from distance.

Westmeath briefly responded with Ger Egan punished a poor Graham Brody kickout, but Laois were starting to build momentum now. Munnelly landed another free before sub Niall Donoher tied the game at 0-6 each with a point off his right foot.

Donoher then gave Laois the lead for the first time with a point from the left wing, and Laois powered on to the half time whistle, as Munnelly (free), Colm Begley and Trevor Collins all hit the target to see them lead 0-10 to 0-6 at the interval.

With Westmeath having the wind advantage in the second half, four points was always a nervy lead for Laois to hold at the break. It was quickly narrowed when play resumed, as Luke Loughlin pointed a free for Westmeath.

Laois eventually responded with a lovely point from Paul Kingston, and they were the only scores of the opening ten minutes as both teams struggled to take control of proceedings.

With the game begging for a turning point, Laois provided it in emphatic fashion. A wonderful, patient move which saw Laois hold possession and bide their time for an opening ended with Colm Begley picking out Paul Kingston 18 yards out. He then turned inside his marker, took a couple of paces, and rocketed a shot into the top right corner of the net for an outstanding goal.

Things got even better for Laois moments later, as they cut Westmeath open again and Paul Kingston's shot was turned over the line by Sam Duncan, and Laois lead 2-11 to 0-8.

Westmeath, to their credit, responded well and Ronan O'Toole and Finbar Coyne both slotted over points. They were then given a reprieve when Benny Carroll appeared to get Laois' third goal, but it was deemed he had thrown the ball over the line, and Westmeath survived.

They made the most of the reprieve though, and within a minute they had a goal, as Mark McCallon bundled the ball over the line from close range.

Westmeath were now just four behind and had wind advantage, but Laois responded to the challenge superbly. Another strong attack saw the ball worked to Paul Kingston, and he scored another spectacular goal to push Laois seven ahead.

Finbar Coyne responded with a point for Westmeath, but Laois more or less wrapped up the win after that. Sub David Conway pressured a poor Westmeath kickout, won possession and played a delightful pass to Evan O'Carroll, who slotted the ball to the bottom corner.

From there to the end it was plain sailing for Laois, as they wrapped up their most impressive championship win for some time.