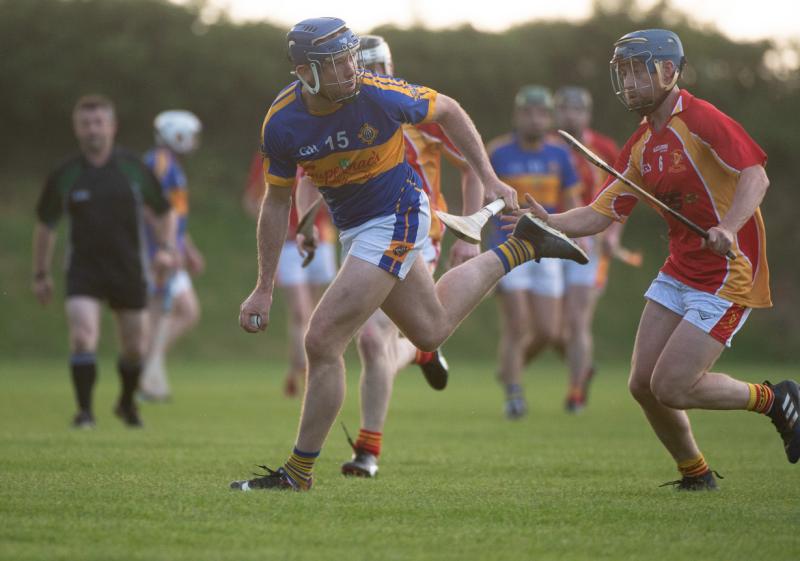 An injury-time Willie Hyland sixty-five gave Clough-Ballacolla the bragging rights as they saw off the challenge of The Harps, by the narrowest of margins in a fiery clash in Ballacolla on Sunday evening.

The Harps made an emphatic start to the game with full-forward, Eoin Clancy, rifling a stunning goal into the top corner of the Ballacolla net with barely twenty seconds on the clock. Clough-Ballacolla settled themselves into the game, with a Willie Hyland free closing the gap to two points.

A Richie Saunders free restored The Harps’ lead to three, but three conversions from Hyland levelled the sides with just over ten minutes played. Saunders’ second free of the day edged the visitors back in front before Michael Lanigan doubled their lead at the quarter mark stage.

Brian Corby and Saunders swapped points, while Saunders and Dunphy would both fire braces before the half-time whistle as The Harps entered the dressing room two points to the good at half-time on a scoreline of 1-6 to 0-7.

A brilliant Michael Lanigan catch from a high-ball into the box saw the wing-forward set up Eoin Clancy’s first point of the evening – adding to his earlier goal. Clough-Ballacolla almost had a goal of their own shortly after Ross Young pulled off an intuitive save to deny John Dwyer’s effort.

They won a free in the scramble for the rebound which Hyland duly slotted over, and then returned the resulting puck-out with a super point from Tom Delaney to bring them within a point.

Saunders notched a free from distance and David Doheny split the posts to push The Harps lead out to three points entering into the final quarter. Clough-Ballacolla came to the fore in next ten minutes as they kept the visitors scoreless, while claiming the next five points.

Substitute Brendan McEvoy, a brace from Hyland (the second of which was initially waved wide before being overturned by the referee), leaving Dwyer to land a wristy point as Ballacolla took the lead for the first time with five minutes remaining.

Two minutes later The Harps were level thanks to Padraic Dunne and Saunders, but there was still time for Shane Hanlon to slot a beauty from out on the sideline before wing-back Pat Walshe looked to have salvaged a draw with a huge point on the stroke of full-time.

A dramatic finale was on the cards as Ballacolla entrusted Willie Hyland to seal the win with a sixty-five in the second minute of injury-time, as Ballacolla now sit second in the table, behind Camross on points difference alone.