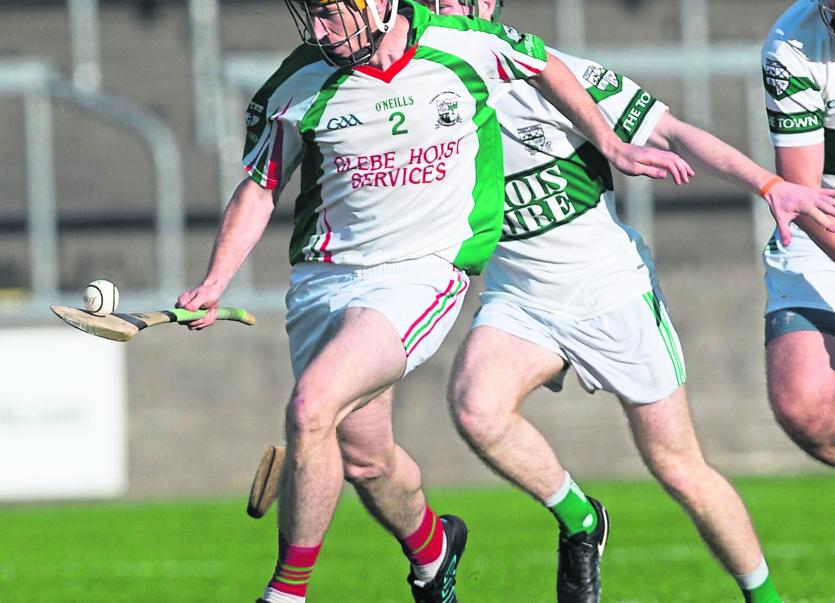 It was a perfect evening for hurling played on the newly built field in Borris-in-Ossory, although it wasn’t a very free scoring affair, with frees dominating a lot of the game.

Borris-Kilcotton got off to the better start with half forward Danny Fitzpatrick stepping up to put over a point from out near the sideline with less than a minute on the clock. However, it did not take long for the visitors to reply with Tadgh Dowling on target at the other end of the field. David Poynton followed up with another point for Rathdowney-Errill which saw the visitors leading 0-2 to 0-1 after five minutes.

Eoin Fitzpatrick was on free taking duty for Borris Kilcotton and he fired over three frees in quick succession to put his side in the lead. Both defences were on top and scores became hard to come by in the final quarter of the first half.

Paddy Whelan stepped up after 17 minutes to hit a long-range point for Borris-Kilcotton, but Eoin Bourke and Shane Dollard replied at the other end with points. After 23 minutes the sides were level at 0-6 each. Two further frees from Eoin Bourke gave Rathdowney-Errill a two point lead at the break, 0-8 to 0-6.

The second half brought a lot more intensity to the game. Jordan Kavanagh and Joe Campion traded points in the opening minutes of the second half, and a long range free from Jimmy Corrigan gave Rathdowney-Errill a one point lead after 40 minutes of play.

Borris-Kilcotton then began to take control as Stephen Dunphy and Eoin Fitzpatrick fired over points. They then had a goal chance saved when Paddy Whelan’s shot at goal was blocked by Damien Madden.

Tadgh Dowling was in good form at the other end of the field as he found the target from out near the sideline. Jordan Kavanagh followed up with his second point of the game which was then cancelled out by a Eoin Fitzpatrick free. After 56 minutes Rathdowney-Errill lead by just one point.

A long range free from Jimmy Corrigan after 58 minutes was the insurance score for Rathdowney-Errill. Rathdowney-Errill now have one loss, a draw and four wins going into the final round of games.