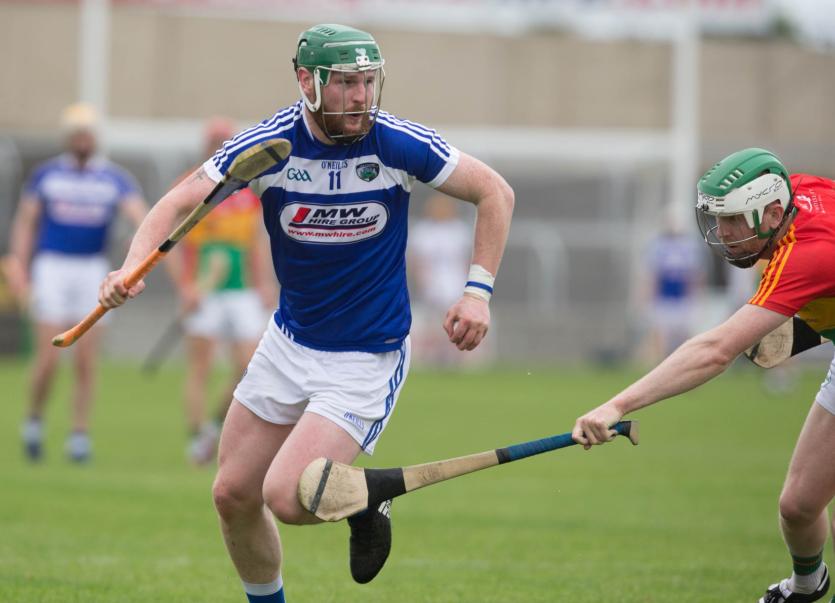 Neil Foyle on the attack for Laois against Carlow. Pic: Alf Harvey.

Laois are facing into a relegation battle in the Joe McDonagh Cup, as another poor display saw them well-beaten by Carlow in O'Moore Park today.

Missing Ross King and Cha Dwyer through injury, Laois looked rudderless in the face of a well-drilled and motivated Carlow side.

Carlow could hardly have asked for a better start, as wing-forward Edward Byrne bustled his way through the Laois defence and fired past Enda Rowland in just the third minute.

That would set the tone for the opening quarter, as Carlow were the dominant side and Laois struggled to find any sort of fluency. Denis Murphy pointed a couple of frees either side of the Laois opener, a point from Ryan Mullaney, as they opened up a four point lead.

John Michael Nolan and Chris Nolan added points in quick succession for Carlow, with Laois making a number of positional switches to try and prompt a response. They almost got lucky then when a ball broke kindly for Picky Maher 21 yards out, but shot for goal lacked power and was easily dealt with.

Carlow continued to punish poor play for the home side, pressuring them into mistakes and showing an impressive eye for a score themselves. With 20 minutes gone, Chris Nolan's third point of the half had Carlow six ahead, 1-7 to 0-4, and Laois looked in desperate need of inspiration.

It finally arrived in a madcap 30 seconds of play. Carlow cut through the Laois defence and teed up Chris Nolan for a shot at goal, but it hit the crossbar and Laois won the loose ball. They quickly launched a counter-attack, and second later Ben Conroy was hauled down in the penalty area. Goalkeeper Enda Rowland made the long trek forward, and duly rattled the net to throw Laois a lifeline.

There was much more life to the closing stages of the game, and while Carlow initially responded well to the setback, Laois reeled them in before the interval, as Ryan Mullaney and Cian Taylor pointed in injury time to see the sides level at 1-9 each heading to the dressing rooms.

Carlow made a bright start to the second half, hitting three points in two minutes from Denis Murphy (two frees) and John Michael Nolan to take the initiative.

Willie Hyland tried to inspire his side with a brilliant point after that, but if anything it was Carlow who responded better. They tacked on two more points before Diarmuid Byrne scythed his way through the Laois defence and placed a shot to the bottom right corner.

Carlow added four points in the next eight minutes, as Laois could only manage two frees in response, with the visitors by far the better side now.

Laois threw themselves a late lifeline when Ryan Mullaney cracked home a brilliant goal, but Carlow hit back with three points in as many minutes to see themselves comfortably home.