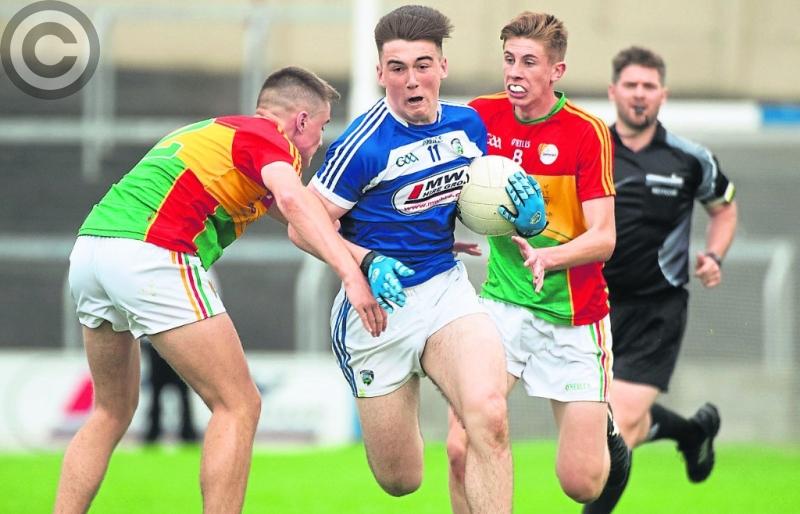 The home side carried a perfect record into the game following wins over Longford and Wexford, while Carlow picked up much criticism for their heavy opening round defeat to Kildare last time out. Yet, with ten minutes to go Carlow led by three points as Donnacha Phelan’s men dug deep to ground-out a result.

It took until the eighth minute of play to set the scoreboard in motion when Niall Carey marauded forward from wing-back to fist over the bar and get Laois off the mark.

Carlow wasn’t far behind as Jacob O’Brien curled over from forty metres to level the sides, before Colin Byrne clipped over from inside the twenty to see Carlow take lead.

The next score would not arrive for ten minutes until Oisin Byrne converted a short-range free. The resulting kick-out was thrown-up due to the Carlow goalkeeper’s persistent time-wasting, and Seamus Farrelly claimed it before offloading to Damon Larkin who duly split the uprights.

A lovely point from Carlow half-back, Richie Whelan, sandwiched between two O’Brien frees from range gave the visitors a two point lead entering injury-time, but a late free from Eamon Delaney closed the gap to the minimum as the referee sounded for half-time.

Carlow increased their lead further on the restart with O’Brien and Patrick McDonnell putting them three clear ten minutes into the half.

Josh Lacey found his range with a well-taken point from a tricky angle, but his opposing midfielder Jacob O’Brien was equal to it as he replied with a booming point from thirty-five metres.

Substitute Josh O’Brien made an impact from the bench as he slotted a brace of short-range frees to bring Laois within a point of the visitors. O’Brien’s sixth point of the evening and Regan’s first pushed the Carlow lead out to three with ten minutes left to play.

Seamus Farrelly finished a well-worked point seven minutes from time to set the scene for a Laois revival, and when Sean Michael Corcoran landed a free from twenty-five metres just in from the sideline to bring them within one it was always going to be a nervous finish.

In the fourth minute of injury-time the ball was entrusted to Corcoran once again, and the Port man made no mistake with the last kick of the game to snatch a draw for the O’Moore men.