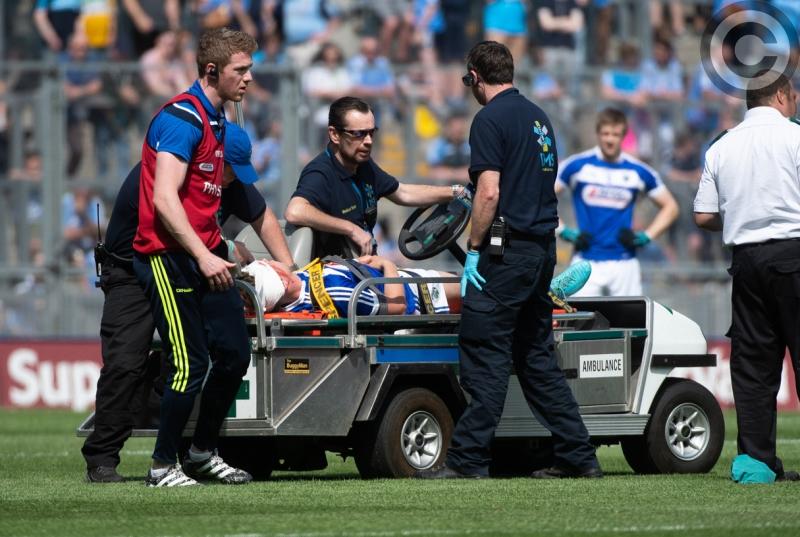 Stephen Attride taken for the field during the game against Carlow. Pic: Denis Byrne

Laois GAA has offered its full support to the Laois Gaelic Football team's brave and inspirational captain Stephen Attride after he suffered a potenially-season ending head injury in Croke Park.

The corner back suffered a 'non-displaced' fractured skull in a brave challenge at the end of the Leinster GAA senior football semi-final againgst Carlow.

The Killeshin club man, who is aged 23, also suffered a deep cut to his head and lost consciousness during the incident.

The injury forced a lenghty stoppage to play. He was conscious when he was brought from the pitch to the nearby Mater Hospital.

He remains in the Dublin hospital and is conscious but the injury could end what has been a successful season for the Laois leader.

Laois GAA county board chairman Peter O'Nell said the Killeshin player will have the full support of all involved with the association.

"We wish him a speedy recovery. He is an inspirational captain. Our thoughts and prayers are with him and his family. The Laois County Board will give him any help he needs during his recovery. We are 100% behind him," he said.

Mr O'Neill said Stephen would be missed from the final with Dublin on June 24 both for his leadership qualities and his playing ability.

"It's unfortunate because he put a lot of effort into preparation and leading the team. He has been a strong figure through the year.

"In saying that sport is like this and you just have to get on with. You have to go on and Laois have to play football," he said.

He added that it is too early to say how long his captain will be out of action.

Another Laois player, Daniel O'Reilly, suffered a fractured skull after the Laois V Carlow Division 4 final earlier this year during an assault in Carlow town.

Daniel has not played for the Laois team since but hast taken part in preparations.