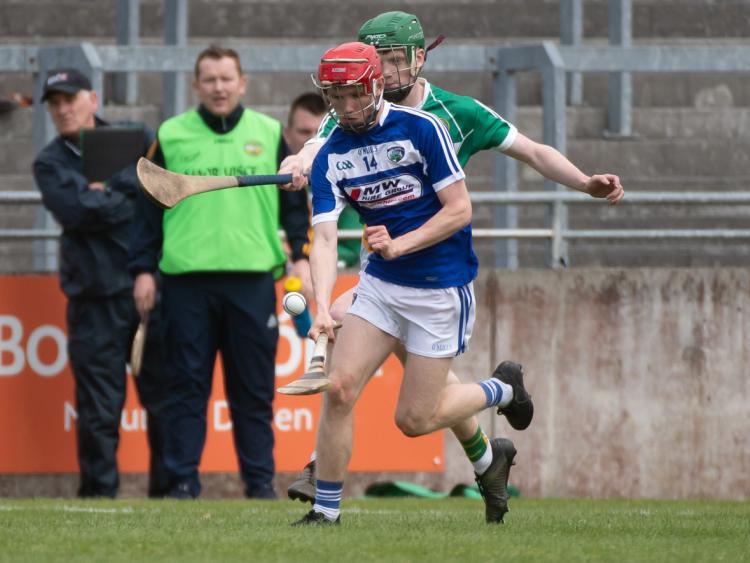 Cathal O'Shaughnessy on the attack for Laois against Offaly. Pic: Denis Byrne.

The Laois minor hurlers bowed out of the Leinster Championship on Saturday afternoon after defeat to neighbours Offaly in Bord na Mona O'Connor Park, Tullamore.

Enda Lyons' team found it hard to assert themselves on the game against a well-organised Offaly team, driven on by the brilliant Cillian Sampson and Cathal Kiely.

Although frees accounted for 0-10 of Offaly's score, it was their potency from play that told as their 2-9 from the open spaces of O'Connor Park eclipsed the 1-5 Laois mustered from open play. The home side's ability to win the breaks allowed them to launch more attacks, a trend Laois found difficult to reverse.

Offaly's stall was set out early when the impressive Cillian Sampson picked and whipped the sliotar over the bar from forty yards. An Adam Kirwan free followed for Laois but another Sampson point from play cancelled that out within seconds. Offaly won the lionshare in the middle and their running style drew frees in good areas.

Cathal Kiely split the posts with four placed balls between the 7th and 11th minutes before another from open play for the Kilcormac-Killoughey man put an arrow through the Laois resistance. They trailed 0-7 to 0-1 with just 12 minutes on the clock.

Laois battled hard to win more ball in midfield and Evan Hawkes claimed a few high balls midway through the half. With ball in hand, Laois looked dangerous, and the likes of Hawkes, Conor Cosgrove and Thep Fitzpatrick ran at the heart of Offaly's defence. This approach yielded results with Mark Hennessy knocking over Laois's second point on 14 minutes.

There was a mini revival on and when Adam Kirwan was brought down on the 21-yard line, another point beckoned. However, the quick-thinking Mountrath man wasn't to be denied his scoring berth and he struck for goal while sitting on the pitch at O'Connor Park. The net billowed. The referee allowed the advantage and suddenly the gap was trimmed to two points.

Offaly, however, continued to pick up more ball and another Kiely free followed Kirwan's goal, before a contentious point was given to Cillian Sampson despite the umpires having a brief consultation. Offaly completed the cancelling out of Kirwan's goal with a third point in as many minutes, once again thanks to the accurate free-taking of Kiely.

Kirwan popped over a placed ball of his own on 19 minutes but when Cillian Sampson and Cathal Donoghue responded, Offaly led by double scores, 0-12 to 1-3. Laois finished the half the stronger with points from Kirwan and Alan Connolly. Cathal Kiely had the final say, however, with his seventh pointed free of the game on the stroke of half-time. Offaly led 0-13 to 1-5.

Kirwan continued to be the main danger for Laois and he regularly got to the ball before his man, and was rewarded with another point from play within seconds of the restart. The revival was short-lived with Cathal Kiely finding his range and scoring two points in reply.

Kirwan and Ciaran Teehan then exchanged scores as Laois tried hard to stay in the game. Another Kiely free made their task that bit tougher, but Laois were holding on and were never fully out of sight in Offaly's rear-view. Captain Conor Cosgrove was put on free-taking duties as Laois looked for goals but he chose to point his first effort on 38 minutes.

Cillian Sampson then effectively ended any hope of a comeback with a goal and a point in a three-minute spell. First he fired over before an unwavering run through the middle was finished with a bullet to the bottom corner. 1-18 to 1-8 with 15 minutes to go was the scoreline facing Laois.

They didn't give up and somehow managed to raise a scare once more. Ciaran Byrne emerged out the field from corner-forward and he pointed twice as the clock ticked close to 50 minutes. Conor Cosgrove then nabbed another free, and the deficit was back to seven.

Kiely once again replied from a placed ball but Kirwan replicated that trick on 54 minutes. When Conor Cosgrove stood over a 21-yard free on the brink of injury time, it was clear there was only one thing on his mind. He duly obliged and rifled a shot to the net, but while that could have pulled the game back to four points, the referee ruled it out. The retaken effort was blzaed over.

If there was any doubt about the result, Cillian Sampson firmly put it to bed with another goal in injury time. Cosgrove finished off with one final free but Offaly were always at arm's length and ran out comfortable 2-19 to 1-14 winners.

The final scoreline probably flattered Offaly somewhat but it is telling that Laois never once led the match. Laois just couldn't get on enough ball around the middle, while the likes of Sampson, Kiely, Luke Nolan and Evan Houlihane were in good form for Offaly.