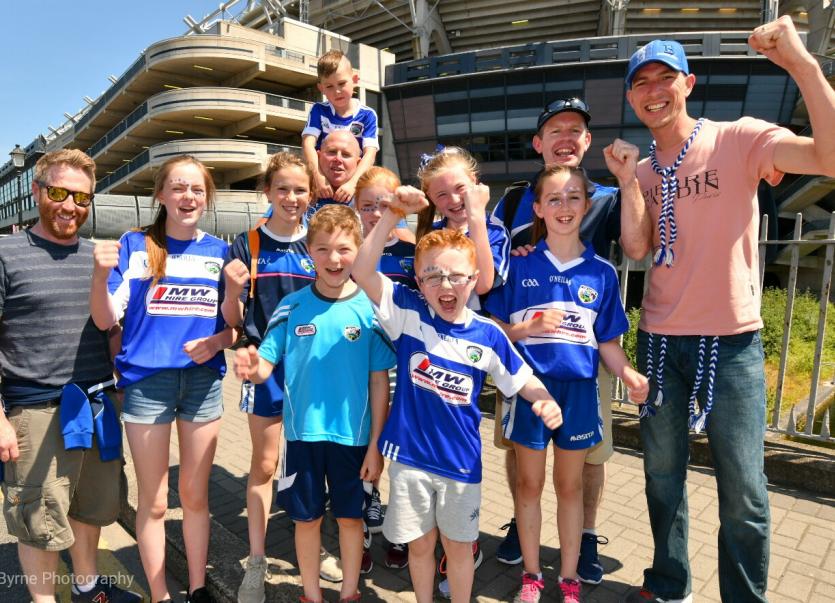 A spirited first half performance from Laois wasn't enough to see them get close to an all-conquering Dublin side in the Leinster final today.

Jim Gavin's side made it eight Leinster SFC titles in a row with a scintillating second half performance, as their class and conditioning came to bear on the game in a big way. Laois fought the good fight as long as they could, but ultimately it was nowhere near enough against the most dominant side the province has ever seen.

Laois turned in a superb first half performance, but were almost undone with less than twenty seconds on the clock. Dublin won the throw in and broke forward at pace, putting Con O'Callaghan through on goal, but his shot was well-saved by Graham Brody.

The goal Dublin were after came soon after that, as Ciaran Kilkenny held off Finbarr Crowley to win possession 12 yards out, and he got a shot away to leave Brody with no chance.

O'Callaghan had another goal chance saved moments later as Laois looked set for a long afternoon, and Dean Rock then tapped over a free to push them four ahead.

Laois finally settled down after that and got their first score courtesy of Alan Farrell in the eighth minute, as he pointed on the run from the right wing.

A foul on Evan O'Carroll brought Laois' next score, with a free from Donie Kingston, and the giant Arles-Killeen man added one from play moments later to get Laois within one.

The chants of 'Laois, Laois, Laois' were starting to reverberate around the stadium now, and they were level soon after. A brilliant move, started by Graham Brody, ended with Paul Kingston picking out big brother Donie, and he lofted the ball between the posts.

Dublin were struggling now, and they scoring touch had deserted them as they hit a series of wides, but a point from Ciaran Kilkenny finally got them back on the front foot.

They were given a golden chance to push further ahead when Mark Timmons was adjudged to have fouled Niall Scully in the square, giving them a penalty. Paul Mannion stood up to take it, but pulled it well wide.

Dean Rock added a free soon after, before Laois cut the Dublin defence open and put Alan Farrell through on goal, but he opted for a point to reduce the deficit to one.

Dublin had the better of the closing stages of the first half after that, and they rattled off five points on the trot through Dean Rock (2), Brian Fenton, Con O'Callaghan and Paddy Andrews to lead 1-8 to 0-5 at the interval.

Just as in the first half, Dublin got the first score in the second, as Con O'Callaghan pointed in the first minute. Laois responded with an excellent score from Kieran Lillis, courtesy of HawkEye, but Dublin hit a purple patch after that as Dean Rock landed a brace of frees and Paddy Andrews pointed from the left wing.

Donie Kingston offered a response from a Laois forward line getting little change from either Dublin or the referee, as he tapped over a close range free, but Dublin won the game over the next few minutes.

Jack McCaffrey hared through the Laois defence before drawing a save from Graham Brody, but Dean Rock pointed the 45. Cormac Costello and Ciaran Kilkenny chipped in with more scores and Dublin just started to pull away now against a tiring Laois defence.

Dublin were on a run of ten points without reply now, and despite Laois hitting a handful of late points through Gary Walsh and Evan O'Carroll, the Dubs cantered to yet another Leinster title.

While the final scoreline was bitterly disappointing, it has still been a hugely positive year for the Laois senior footballers, and they must regroup now and have a real crack at breaking into the Super 8s.