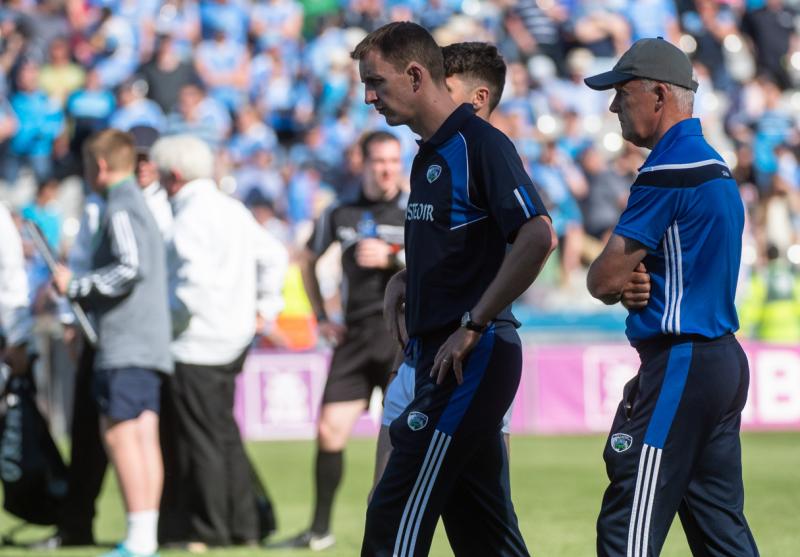 In the wake of Laois’ Leinster final defeat to Dublin in Croke Park on Sunday, Laois manager John Sugrue knows he’ll have to pick his players up after their first defeat of the season.

Having stuck with the Dublin powerhouse for the first half, Jim Gavin’s men found their rhythm in the second thirty-five minutes to finish strong with eighteen points to spare. Now, John Sugrue is faced with a different post-match atmosphere in the dressing room. “I don’t think we need to make an issue out of it today.

“We need to go away and be together and enjoy each other’s company and see if we can get ourselves through the next few days, and after that we’ll focus on the next round.

“The intensity today to be fair, I know you’d give respect to the other teams that we played but they’re probably not in the same realm as Dublin either.

“Dublin is a massive step up. In some of the other provinces you might get a better run, they might be more competitive.”

In what was Laois’ first Leinster final appearance in eleven years, Sugrue’s men were highly competitive for the opening half before the Dubs pulled away after the break.

“They have real quality. Now, I’d still consider that we’ve got quality on the bench. But the scenario at present is that they’re the standard bearers in this country. We’ve measured ourselves against them and we’ve come up short.

“We’ve obviously got work to do to close the gap, and it’s a significant amount of work to do.

“But I’d like to think we might have raised one or two eyebrows during that first period as regard to what competition we could bring to the game. Obviously it wasn’t sustained.

I’d like to think we might have raised one or two eyebrows during that first period as regard to what competition we could bring to the game.

“It’s a Leinster final, Laois don’t get there too often, we’ve come up and played to some degree and then faded fairly strong then towards the finish.

“Yeah, we’ve got to refocus now, there’s no two ways about it.”

On a more positive note for Laois supporters, Sugrue offered an injury update on Graham Brody who was substituted midway through the second half. “Graham twisted his ankle during the week and he was feeling a bit uncomfortable.

“So we pulled him off more precautionary than anything else at that stage in the game.”

The news will come as a relief to supporters as Brody has been in flying form for the Laois cause this season, and pulled off a number of crucial saves before making way against Dublin.

Laois are very much still in the Championship and will go into the pot for Round 4 of the qualifiers next Monday where one more win will see them qualify for the Super 8s."Look, we're going to have to have a serious cut off of that game.

"The opponents we don’t know, but we have to gather ourselves together very quickly now and try and put some energy and focus back to the boys, and see if we can make Super 8s."

Read also: COMMENT - Laois player will bounce back from this defeat, and supporters need to do the same