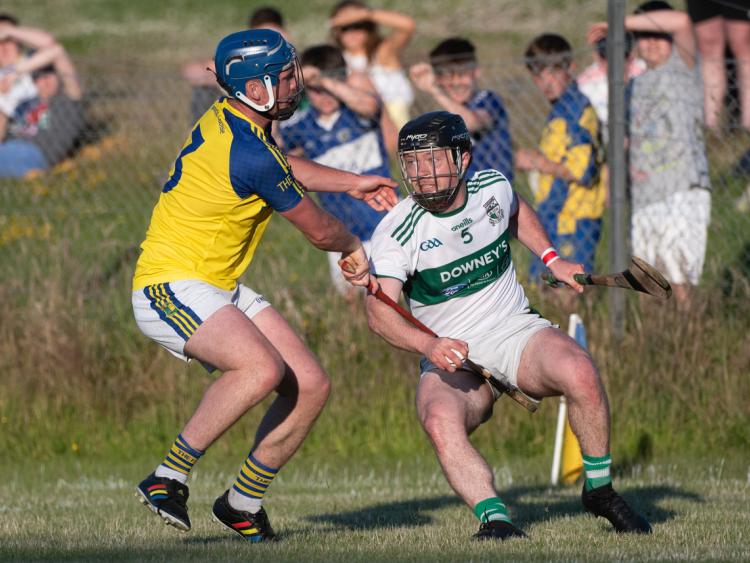 Dean Lynch on the attack for Portlaoise against Abbeyleix. Pic: Denis Byrne.

Abbeyleix produced one of their best performances of the season to shoot down Portlaoise and secure their place in ACHL Division 1 for another season.

In what was the first leg of the relegation playoff, Portlaoise will get one more chance to hold onto their place in the top tier if they can fashion a win over Castletown next Friday night in Mountrath.

The game was played in perfect conditions in Raheen, and Abbeyleix got off to a bright start against an understrength Portlaoise team. Liam Delaney opened the scoring, and points quickly followed from Jake Cranny and Ciaran Carroll to open up a three point lead.

Portlaoise finally got to the pitch of the game with points from Ciaran McEvoy and Aaron Bergin, but another Abbeyleix run of three points without reply had them 0-6 to 0-2 in front.

Portlaoise had their best spell of the game after that, inspired by a fine point from Cormac Rigney. Aaron Bergin hit the target with a couple of frees after that to get them within one, but Abbeyleix made their move for victory after that.

Jake Cranny landed a long ball into the square, and with Portlaoise failing to deal with it properly, Ruairi Dunne pounced to fire in the opening goal of the game. Eoghan Fennelly chipped in with a few frees and Abbeyleix were now six ahead.

Ciaran McEvoy got a point back for Portlaoise, but at half time Abbeyleix held the upper hand with a 1-11 to 0-9 lead.

Portlaoise needed to really hit the ground running at the start of the second half, but it was Abbeyleix who got the decisive start.

Enda Rowland landed a huge free from inside his own half as they went on a four point scoring run, and with a gap of nine now between the sides, Portlaoise had a mountain to climb.

Aaron and Gary Bergin offered a riposte for Portlaoise, but Liam Delaney and Brian Walsh cancelled out those scores with points of their own. Enda Rowland launched another one over from range, and Abbeyleix didn't look like getting caught now.

Portlaoise gave themselves a glimmer of hope late on when Tommy Fitzgerald picked out Aaron Bergin, and he rifled a shot past Enda Rowland for a well-worked goal.

Any hopes of improving on that were swiftly ruled out, however, as Conor Bergin and Dayne Peacock hit back for Abbeyleix before Enda Rowland launched over two more long range frees.

Liam Delaney then put the seal on the win with the final score of the game, and Abbeyleix could breathe a collective sigh of relief having secured their place in the Division for another year.

For Portlaoise, they at least get a second bite of the cherry this Friday night, but a big improvement will be needed if they are to avoid making the drop.