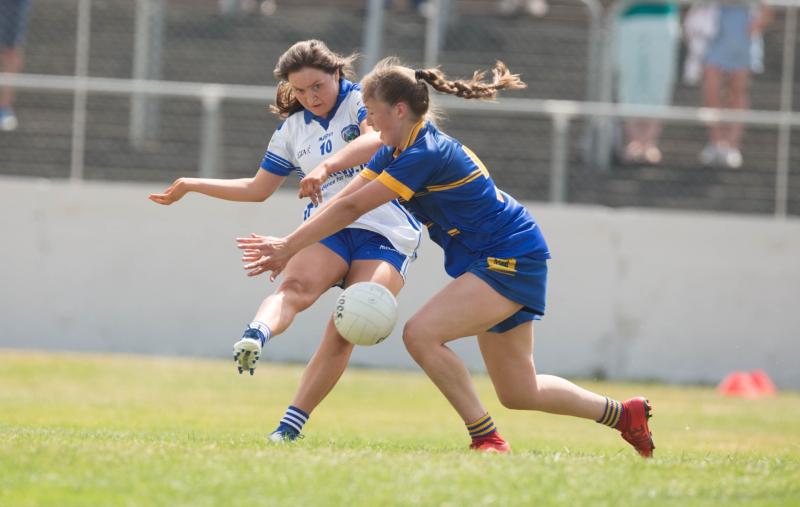 Laois are the Leinster Intermediate champions for 2018 after they held off a gutsy Wicklow side to claim a well-deserved six point win.

Laois could hardly have asked for a better start to the game, as they had the ball in the Wicklow net with less than two minutes on the clock. The move started way back in their own defence with Amy Potts leading the charge down the field.

They worked the ball to Erone Fitzpatrick 35 yards out, and she then dinked a peach of a pass over the Wicklow defence to Emma Lawlor in the penalty area. Lawlor showed the nerve needed in that situation, as she blasted to the net from close range, and Laois were up and running.

Wicklow responded well to that setback, with Amy Murphy opening their account in the fifth minute, and then Maedhbh Deeney slotted over a free. Laois had another goal chance after that when slick passing put Ciara Burke through, but she wasn't decisive enough, and her shot was saved by Kim Connors.

Wicklow then drew level thanks to Marie Kealy, and that was the warning Laois needed to click back into gear. Another series of quick passes resulted in Erone Fitzpatrick pointing from 21 yards out, and Clare Conlon added another point from a free within 30 seconds.

Conlon kept up the Laois momentum with a brilliant point from the left side, and then yet another incisive move in the Laois forward line allowed Emma Lawlor to point from close range.

Lawlor helped to create the next score, as her shot for a point hit the post and bounced back into the penalty area. Laois scooped up the loose possession and worked it to Ciara Burke, who fisted the ball over the bar.

Another point from Clare Conlon made it six in a row from Laois, and they looked like they had the measure of the Wicklow team at this stage.

Wicklow were still dangerous when they got forward though, and twice cut Laois open at the back. The first time, Maedhbh Deeney got through on goal, but Fiona Kelly did brilliantly to throw herself in front of the Wicklow attacker and block the shot.

Moments later it was Laura Hogan who got through, and this time she opted for a point.

Laois responded in less than a minute, as good work from Caoimhe Simms got Laois close to goal, and the ball was worked out to Clare Conlon, who kicked her fourth of the half.

Erone Fitzpatrick then saw another Laois goal chance saved, but she would register the last score of the half with a brilliant point from out on the left wing. That score saw Kevin Doogue's side take a 1-8 to 0-4 lead into the dressing rooms at half time.

Wicklow came out strongly at the start of the second half, but Laois absorbed whatever blows they tried to land, and then hit back in devastating fashion. A strong run forward from Caoimhe Simms ended with Meaghan Dunne being put through one-on-one, and her powerful, low finish nestled in the bottom corner.

Clare Conlon then picked out Emma Lawlor with a lovely pass and she slotted over a point, as Laois now opened up an eleven point lead.

Credit to Wicklow, however, they dug in and really tried to get themselves back into the game. Maedhbh Deeney slotted over two quick-fire frees, before Jenny McEvoy had a very harsh free given against her, and Laura Hogan tapped that one over.

That made it a six point game, and Laois were now down to fourteen players as sub Mary Cotter sent to the sin bin.

Clare Conlon tried to settle her side back down with a free, but Laura Hogan did likewise for Wicklow to keep up the pressure. Laois could have wrapped it up then when Meaghan Dunne got through on goal again, but she blazed over the bar.

Laois were then reduced to 13 players when Maggie Murphy, seconds after being introduced, was sin binned, and Wicklow then hit two points in quick succession to get within five.

Thankfully for Laois that was as close as it got, as a strong run from Erone Fitzpatrick saw her win a free, and Ciara Burke slotted it over to allow Laois run out deserving winners.