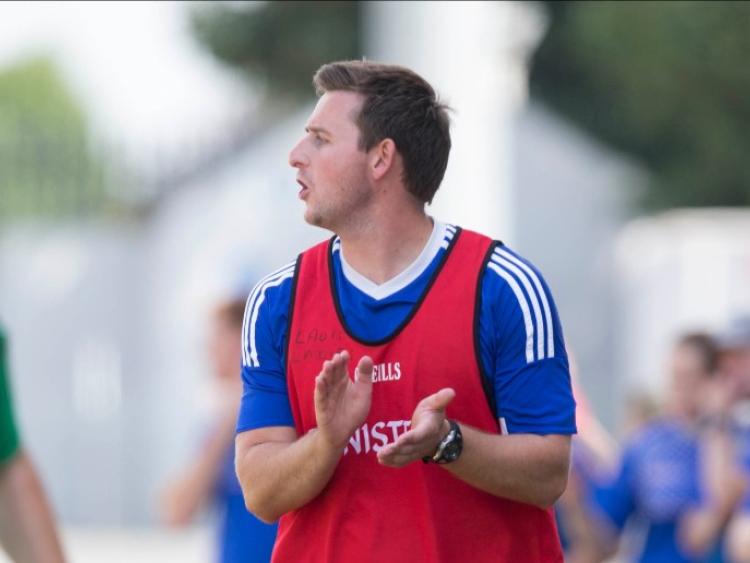 Kevin Doogue calling the shots on the line for Laois. Pic: Alf Harvey.

Graiguecullen man Kevin Doogue was delighted to see his side get their hands on the Leinster LGFA Intermediate title on Sunday, but he's already eyeing up greater things for his young charges.

Doogue has been leading a rebuild of the county's senior football team over the last few years, as he injects a whole host of young players into the setup, and they were rewarded with some silverware in Carlow on Sunday afternoon.

Speaking to the Leinster Express after the game, he was delighted to get the win, but quick to remind his players there is more to be achieved this year. "We had three aims at the start of the year, stay in Division 2, win Leinster, and win an All-Ireland. We have two done now, and we have the third go."

They grew into the game in fairness to them, they weren't afraid of us.

As for the game itself, Laois started strongly, went through a bit of lull before then dominating the first half. They played some lovely football in that opening period, but didn't consistently replicate it after the break. "We started very well, but we should have had two or three more goals, the game should have been out of sight.

"The more that you give teams that are an underdog a chance in the game, the better they get. They grew into the game in fairness to them, they weren't afraid of us. They knocked up 13 scores, we had conceded four at half time, we conceded nine in the second half. We should have been (conceding) four and four, max."

He puts there drop in performance in the second half down to a lack of width, but he was still delighted with the effort of his players. "Yeah, we lost the width of the field in the second half, no matter what we tried to do.

"I put Erone (Fitzpatrick) to half back for ten minutes which didn't help either, but I thought Caoimhe Simms was superb. Erone worked very hard, Jane Moore put in a good shift for 45 minutes, but Jenny McEvoy and Ali McEvoy... when Ali went off for a while we looked shaky enough, but when she went back in we were very settled, they're top class."

A notable aspect of Laois' play was their work rate, which was hugely impressive on an energy-sapping day. "They all worked very hard for each other, I suppose we're not used to winning games, we're trying to compete and trying to stay at senior level so there is a little bit of fear there, that will go when we win more games and more silverware, please god."

They all worked very hard for each other, I suppose we're not used to winning games

For now though, the players can celebrate before getting in some club championship action, and Doogue will be keeping a keen eye on the action as he looks to bolster the squad. "We're out in four weeks, we play Longford.

"They'll go back to their clubs now for seven or eight days, play club championship which will be nice and competitive, and I'll see if I can pick up one or two along the way in the club championship. If someone can add something to the panel, we'll never stand still, we're always trying to build and build."