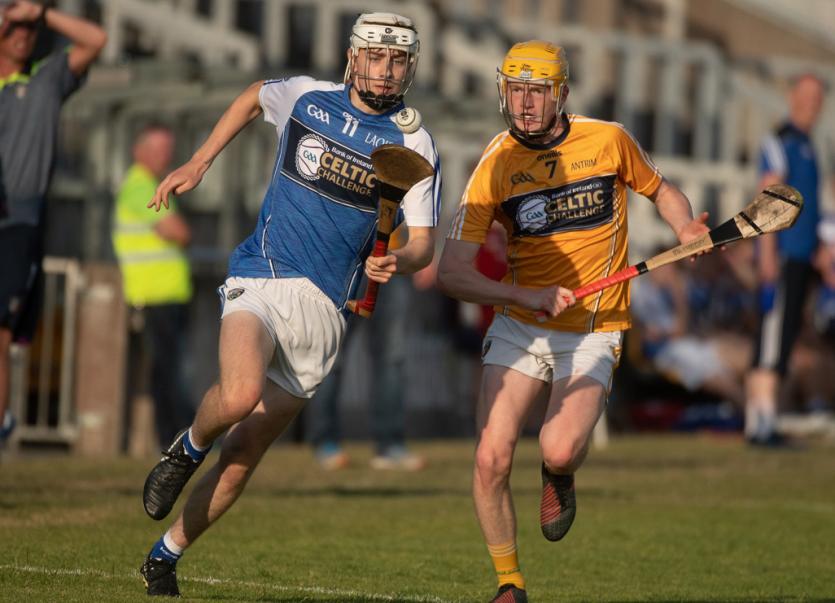 The Laois U-17 hurling squad were crowned Celtic Challenge Jerome O’Leary winners after a well-deserved victory in O’Connor Park on Saturday night.

Only a point separated the sides at the interval, but a very strong opening twenty minutes to the second half from the O’Moore men left the Ulster outfit with too much to do.

Conor Walsh grabbed the first point from a placed ball in the first minute. However, Antrim made the brighter start, scoring the next 1-2.

Midfielder Paudie McGilligan was Antrim’s main scoring threat, and he placed over two frees, before full-forward Caolan O’Duffin scored the first goal of the game. Miscommunication between Laois goalkeeper David Sheeran and his defence allowed O’Duffin to take advantage of the mistake and raise a green flag.

Laois looked nervous early on and Antrim had settled well, as they added another through Cahir McCloskey. However, a Laois goal gave them the confidence boost they needed.

A sublime catch and a deft pass from midfielder Oisin Murray to Kevin Mulhall put him through on goal, and he dispatched to the bottom corner.

Kevin Mulhall added a free and Gerry Williams levelled matters after he caught a long ball by Niall Coss, and turned onto his good side to split the posts.

Laois led by the minimum at the break thanks to Conor Walsh, Gerry Williams and Niall Bennett.

Laois began the second half with the first score, as Camross’s Niall Bennett won a free and converted it himself. David Sheeran was put into action once again, as Caolan O’Duffin bore down on goal. The Abbeyleix shot stopper proved equal to the attempt though, atoning for his earlier error.

The sides traded points through Paudie McGilligan and Kevin Mulhall (free), before another McGilligan free put Antrim within one.

However, Laois grabbed their second goal to put space between the teams. Niall Bennett cut in from the right wing and tried to square it to Darragh McEvoy, but it was intercepted by Antrim. However, the ball fell to the one man that Antrim didn’t want it to fall to. Kevin Mulhall raised the green flag for Laois with an unstoppable finish.

Paudie McGilligan cut the gap once again for Antrim, but Kevin Mulhall grabbed his third goal soon after. The Clough-Ballacolla forward showed scintillating pace and produced a sweet finish to match.

McGilligan was trying everything to bring his side back into it, and went for goal from a close range free, but Fionn Holland got his hurl to it and it flew over the bar. Laois hit a quick 1-2 to put the game beyond Antrim, despite a late comeback.

Kevin Mulhall’s free was not dealt with by the Antrim defence, with the sun playing its part, and it ended up in the back of the net. Gerry Williams put over a further two points as Laois held a ten point lead.

McGilligan and Williams traded scores, before Colla McDonnell scored Antrim’s second goal, as he tapped in the rebound after a decent save by David Sheeran. Kevin Mulhall responded with a point, but a Joe McToal goal set up a nervy finish for Laois. However, Antrim left it too late, and Laois went home with the honours.