Laois looking to make a statement against an impressive Monaghan outfit 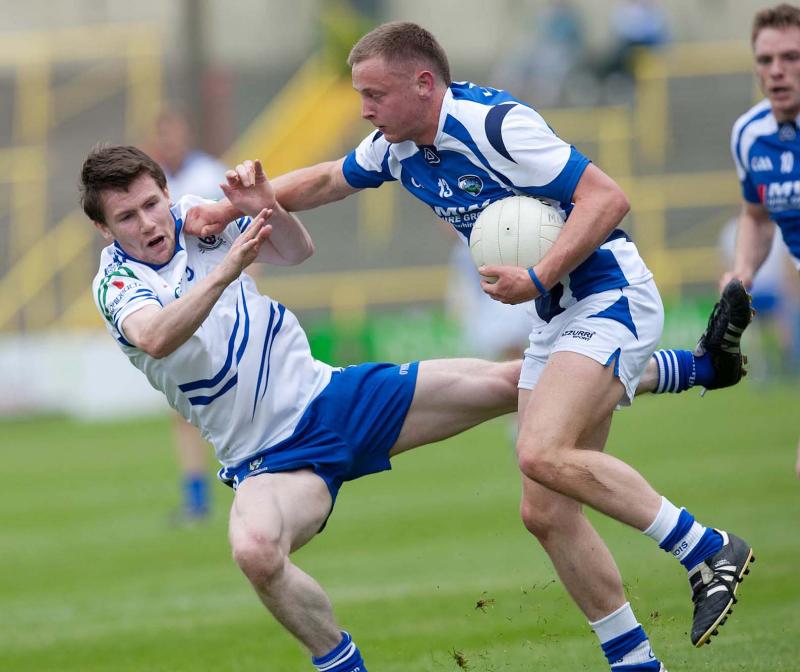 Damien O'Connor brushes aside Karl O'Connell when the teams met in 2012 at O'Moore Park.

After a chastening second half experience for Laois in their Leinster final clash with Dublin, they are back in action this Sunday against Monaghan.

The game itself doesn't have the prestige of the Leinster final, but it is still a massive opportunity for Laois this weekend. A trophy may not be on the line, but a place in the Super 8's is, and that's a significant goal for all the teams left standing in the Qualifiers.

Monaghan are not in the same bracket as Dublin, but Malachy O'Rourke has moulded them into a considerable force. They just missed out on a place in the NFL Division 1 final this year, thriving among the big names of the sport.

The Farney county has a population of just 61,000, but they have maximised their resources, and in Malachy O'Rourke, they have one of the best manager's in the country.

He guided them to three Ulster finals in a row in his first three years at the helm, winning two. They are now an established Division 1 side in the league, and he has a deal with the Monaghan County Board to remain in place until 2019.

They are a settled, hardened and astute team, and in many ways they are a template for county's like Laois. They have had to fight for their place at the top table, just as Laois are trying to do now, and once they got there, they managed to consolidate their place.

This Sunday's game should be an open and shut case, when looked at rationally. Monaghan are massive favourites for the win, and the fear for Laois supporters is that the loss to Dublin has stunted whatever momentum Laois had built up.

while Monaghan are undoubtedly an excellent side, they have shown themselves to be prone to the odd slip up against inferior opposition.

It's not that simple though, because while Monaghan are undoubtedly an excellent side, they have shown themselves to be prone to the odd slip up against inferior opposition.

In 2017, they lost to Down in the Ulster semi-final in a shock result. They managed to bounce back in the Qualifiers and were eventually beaten by Dublin the All-Ireland quarter-final.

This year, they were beaten by Fermanagh in the Ulster SFC in one of the biggest shocks of the year, but Laois fans will now be wondering if that means that they have had their warning. No doubt that result will have focussed the minds of the Monaghan players, but that doesn't mean they are guaranteed to win this Sunday.

They have been able to recover from the loss to Fermanagh with two straightforward victories over Waterford and Leitrim. The games were so one-sided that there is only so much you can take from them, but a few things are telling.

Against Wateford, they managed 26 scores, but had 15 different scorers, an incredible spread. Against Leitrim, they registered 20 scores across ten different scorers. While Conor McManus is the marquee name, this is a side which clearly plays for each other, and a huge number of their squad can pop up for a score, making them tough to defend against.

The other notable aspect of their play is how often their defenders get forward to score. Against both Waterford and Leitrim, their entire starting half back line scored. Two of their starting six defenders scored in the loss to Fermanagh, and three of the starting six scored against Tyrone.

This Monaghan side will test the fitness and discipline of Laois to the max.

This Monaghan side will test the fitness and discipline of Laois to the max. Those who could find themselves on the Laois half-forward line, players like Niall Donoher, Paul Kingston, Alan Farrell, or Benny Carroll, will be in a for a tough time of it on Sunday, because they can't afford to give their markers free run of Pairc Tailteann.

The best way for Laois to keep them pinned back is to try dominate the ball, and keep it headed in to Donie Kingston and Evan O'Carroll. Donie didn't have his best display of the year against Dublin, although he was under considerable pressure from Philly McMahon.

He remains a totemic figure for Laois, however, and with the right ball played into him, he's hard to handle. McMahon figured out fairly quickly how to spoil him on the high balls, but when it was played out in front of Kingston, he invariably won it. More of that kind of passing forward will be needed.

O'Carroll proved a willing runner against the Dubs and has probably done enough to retain his place, although the likes of Ross Munnelly and Gary Walsh will be pushing hard for one of those places in the full-forward line.

At the back, the prospect of Gareth Dillon taking up a man-marking role on Conor McManus should be fascinating, but Conor McCarthy is another prodigious scorer for Monaghan that will have to be watched closely.

Much like against Dublin, this is a game where the heart says Laois can pull off a shock, but the head says Monaghan should have too much in the tank to allow that to happen.

Much like against Dublin, this is a game where the heart says Laois can pull off a shock, but the head says Monaghan should have too much in the tank to allow that to happen.

As with all games when you're the underdog, you have to start well and keep yourself in the game. The longer you can do that, the more you can sow frustration or discord in the opposition, and from there you see how far you can take it.

A big Laois crowd travelled to Croke Park too, and while Navan is not as easily accessible, a 2pm throw-in time is ideal.

This year has been one of steady progression for Laois, but this is a real chance to make a big jump forward in their development. It would be a statement victory, with massive rewards on the other side. Another big day awaits Laois GAA this Sunday.