BREAKING - Brody heroics not enough as Laois lose out to Monaghan 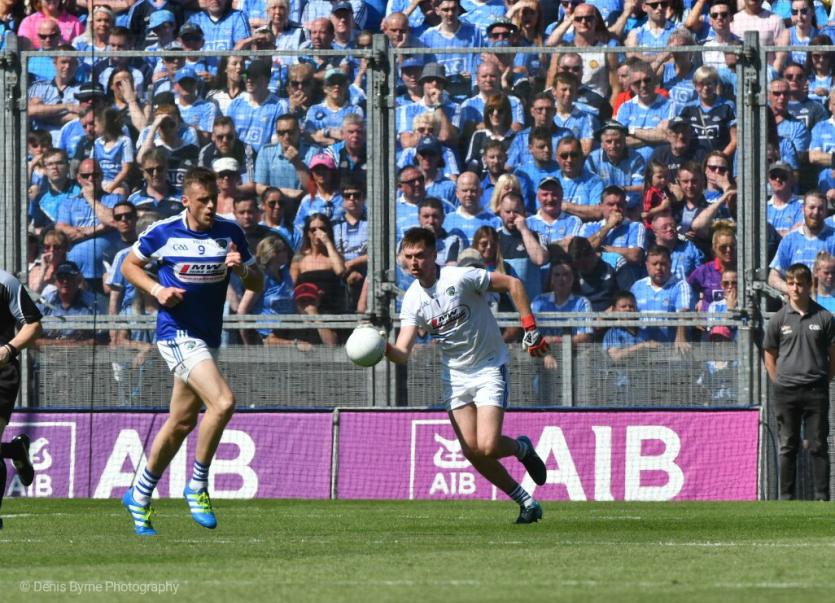 Graham Brody brings the ball out of defence for Laois. Pic: Denis Byrne.

A stunning performance from Graham Brody wasn't enough for Laois as they lost out to Monaghan by five points in their All-Ireland Round 4 Qualifier clash today.

The Portlaoise netstopper made six incredible saves over the course of the game, but Monaghan just proved too strong overall, having put in a brilliant first half performance. They lead by eight points at one stage in the half, and just gave Laois too much to do.

Monaghan wasted little time in justifying their favourites tag, with Fintan Kelly hitting the opening score with a little over two minutes played.

Laois drew themselves level thanks to a brilliant long-range free from Evan O'Carroll, after he was fouled, but Monaghan took a stranglehold on the game after that. With runners appearing from everywhere and Laois struggling to man-mark, the Monaghan players created plenty of space and, with the wind at their backs, picked off scores at their ease.

McManus then landed a free before Brody was called into action again, this time making a point-blank save from Ryan McAnespie. His Monaghan counterpart, Rory Beggan, pointed the resulting 45, and then Niall Kearns added another to see Monaghan lead 0-7 to 0-1 after 16 minutes.

Laois tried to stem the tide with a free from Ross Munnelly, but Monaghan replied with interest. Shane Carey pointed twice before Karl O'Connell curled over another from the right wing, as Laois were being overrun.

A good run from Evan O'Carroll saw him evade his marker and point from the edge of the penalty area, but again Monaghan responded strongly. Conor McManus kicked an incredible point from way out on the left wing to restore their eight point lead.

Donie Kingston then landed a brilliant free from near the sideline, into the wind, but as was the way of the first half, when Monaghan were hit with a score, they hit back harder. Jack McCarron and Beggan (free) sent them nine clear, before Laois threw themselves a lifeline.

John Sugrue's side were getting joy out of running at the Monaghan defence, they just didn't get to do it often enough. The fruits of it were seen in the 35th minute when Paul Kingston jinked away from his marker and lashed a low shot into the bottom corner for a brilliant goal.

Again Monaghan looked to respond, and Conor McCarthy had a glorious chance goal second later, but Brody produced a stunning save. They did finish the scoring for the half, however, as Conor McManus landed a free to leave it 0-14 to 1-4 at the break.

The second half started off in a more low-key fashion than the first, with points from Conor McManus and Donie Kingston (free) the only scores of the opening ten minutes.

Laois hit a bit of a purple patch after that, hitting three in a row for the first time in the game. It started with a Donie Kingston free, and then Ross Munnelly added another placed ball moments later. Evan O'Carroll added another from play as Laois got themselves within five, but Monaghan responded.

Paudie McKenna and Conor McCarthy both pointed to steady the ship, with Evan O'Carroll again providing the response from Laois. Monaghan could have had a couple of goals after that, but Graham Brody made a couple of incredible saves, and they had to settle for a point from Ryan McAnespie.

With the pace seemingly gone out of the game for a few minutes after that, Laois came roaring back late on. Donie Kingston got his first point from play, before Ross Munnelly won, and then pointed, a 30 yard free.

With the Laois crowd finding their voice, Colm Begley curled over a lovely point from distance, and Laois were now within four with five minutes to go.

When six minutes of injury time were announced Laois fans were hoping for the best, but Monaghan took the sting out of the game then, with Ryan McAnespie getting a crucial point, as Monaghan edged home by five points in the end.