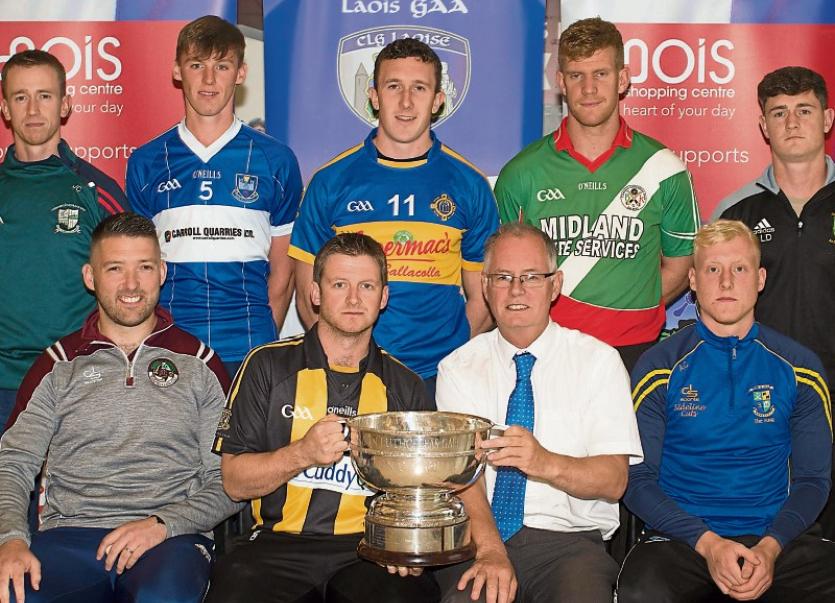 And so, 298 days after Zane Keenan and Joe Phelan held the Bob O'Keeffe Cup aloft in O'Moore Park, the battle for the ultimate prize in Laois GAA club hurling commences once more.

For the first time since 2014, Camross enter a championship trying to retain their title. As so many teams have found, it is now turning into something of a poisoned chalice, as the Bob O'Keeffe Cup has failed to spend successive winters anywhere since 2003.

We have written at length about that in the past, so won't labour the point here, but suffice to say previous victories are no guarantee of success in Laois.

As title defences go, Camross do at least appear to be well-placed to buck the trend. Having won everything available to them at senior level last year, they followed it up with back-to-back league titles.

They were impressive at times against Rathdowney-Errill in the final, but you never really got the sense they were even scratching at the surface of their true potential.

Gearoid Burke is currently sidelined with a broken finger, and Darragh Duggan has a problem with a nerve in his back. Damien Keenan has retired, Darrell Dooley and Tomás Burke will miss the opening round through suspension, and Dwane Palmer has spent the summer in America.

That should have seen them struggle this year (of those six listed above, only Dooley started the league recent league final), but Camross have simply found a different rhythm, and allowed new players the opportunity to stake a claim.

After five years and two SFC titles under Arien Delaney, Danny Owens has stepped into the hotseat now, and it was well-timed. Five years is a long time for one man to keep motivating the same group of players, and it was to Arien Delaney's credit that he bookended his spell in charge with two titles.

Having won last year, Camross couldn't return this year hoping to do the same thing and expecting to win, so Owens' arrival has offered them a new voice and a new perspective.

That willingness to see things through fresh eye was on display during the league final. Andrew Mortimer has been given a chance to nail down a place as a corner-back. Malvin Moloney is out at wing-back, and young Eoin Gaughan was handed a start.

Oisín Bennett, another talented young hurler, is knocking on the door for a starting place, and the Camross panel is probably the healthiest it has been for some time.

Trying to top last year, when they won so much across a variety of grade, will take some effort, but there should still be plenty of hunger in this Camross side.

For a start, they have probably underachieved for a club of their size and tradition. Last year's win was just their third in 21 years, which is a fairly poor return for a club which so dominated the landscape from the late 1950s up to the mid 1990s.

They have been more consistent of late, in terms of making finals at least, but there is no doubt they are capable of more. They are in an incredibly tough group too, so there won't be time for bedding into the championship, they'll have to start well.

The list of challengers is no secret, and chief among them are last year's beaten finalists. Clough-Ballacolla lost by just one point in last year's final, having been unable to call on Stephen 'Picky' Maher due to injury.

Thankfully he has sufficiently recovered from a dreaded cruciate ligament injury to get back into action this year, but no sooner were Clough-Ballacolla cheering good news when the bad news hit them like a tonne of bricks.

Darren Maher's serious injury at the end of the league will see him out of action for the foreseeable future, and Tom Delaney is joining him on the sidelines. Darren's absence, coming so late in the league, leaves them with little time to bed in a replacement.

He has been a wonderful player for them, and an automatic name at full-back for some time. Whoever tries to fill the void will have only had a few practice games to get their bearings, so it remains to be seen how defensively solid they are in the weeks ahead.

If they can absorb Maher's injury without too many negative consequences, then they'll be right back in the mix for SFC honours.

Rathdowney-Errill, of course, are right up there too. A place in the league final shows they are still a team to be reckoned with, but there are nagging doubts about Rathdowney-Errill at the moment.

They have been trying to slowly replace some of their stalwarts from their glory years, and that takes time. The likes of Pat Mahon, Enda Meagher, Lar Mahon and Brian Campion have been outstanding for them, but they had to be replaced, and the club have done well to keep the production lines going.

However, looking at Rathdowney-Errill in the league final, they didn't look like a settled side at all, rather a mix of players just past their peak, some still a few years away from their's, and others struggling to find out exactly where they fit into the current side.

Ross King's absence for most of the group stage is a massive loss, and a heavy scoring burden will fall back on Mark Kavanagh and Paddy Purcell.

If things do click for Rathdowney-Errill then they will obviously be a force to be reckoned with, and it was only two years ago that they played their part in the best Laois SHC final of all time, but there are still a few doubts hanging over this current side.

The team they lost to in that 2016 epic, Borris-Kilcotton, have been a little under the radar this year. Solid in the league without making the knockout stages, they usually suffer from having a good few players in with the county.

They will no doubt be disappointed with the poor effort they put up in defending their title last year, but to be fair to them, it was all new territory for the players and the club.

We expect PJ Scully to have a really good year, and if Aaron Dunphy, Neil Foyle and Joe Campion follow suit, then they'll be well set in attack.

They have strength all over the field, experience, and a good squad. They will have learned after last year just how ruthless you need to be in order to keep winning at the top level, and if they can show some of the form they showed in the latter part of the 2016 season, it'll take a good team having a good day to beat them.

While the above clubs are probably the four major contenders, snapping at their heels are Abbeyleix, who will point to the win over Camross last year as proof of their improvement. Their league form this year wasn't impressive, and they missed Eoin Reilly, who moved to the Middle East.

They're hoping Reilly can make it home for some of their games, but there will obviously be issues around form and fitness if he does make it onto the field. Abbeyleix have been a young, up and coming team for a while now and you eventually have to come of age. Until the tap into a greater reserve of consistency, they don't look like threatening the bigger guns in the competiton.

Castletown Gaels welcome back the Slieve Bloom contingent, which of course means Ben Conroy returns to their attack. He finished the intercounty season in superb form, and he gives the Castletown attack the natural focal point they were probably lacking. Much like Abbeyleix, however, they have developed a lot of exciting young hurlers in recent years, but are probably a few years away from peaking. They are in an incredibly tough group too, which won't help.

Ballinakill should have made a final back in 2016, but never really showed that form last year. In Cha Dwyer they have, on his day, the best forward in the county. If he has a good season then Ballinakill will follow suit, but the problems for them remain a lack of strength in depth, and if they pick up any injuries they could really struggle.

That leaves Ballyfin Gaels, who at the moment appear to be the favourites for relegation. It is an enormous task to juggle senior hurling and football commitments for a small rural club. It eats into the time coaches have with players, and that has obvious knock-on effects.

They are in a more manageable group at least, and in truth, while we are tipping them for relegation, we wouldn't be overly surprised to see them clip the wings of more vaunted opponents. There is wonderful spirit in the club, they have a solid freetaker and they work like demons for each other. They may not have the resources of others, but they won't roll over either.

Overall, it's as hard to predict as ever when it comes to the Laois SHC. You'll find our official predictions on the next page, but hopefully we get a good competition, because Laois hurling needs it.