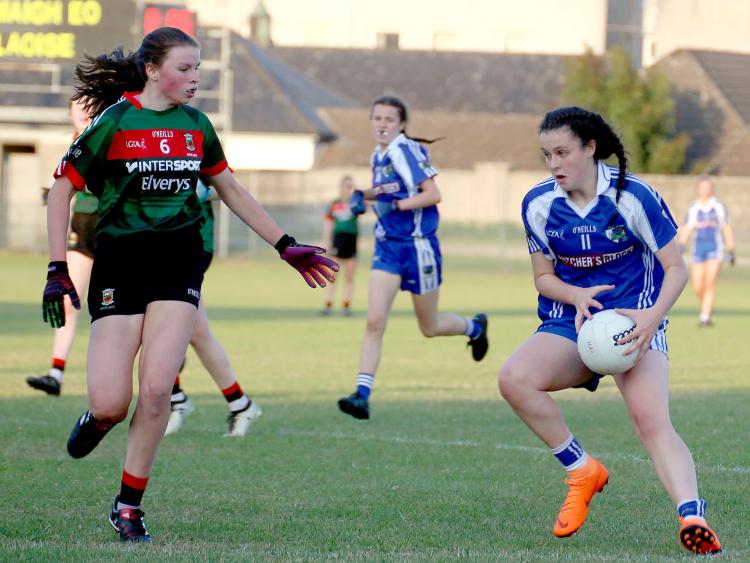 Della Doherty on the attack for Laois against Mayo. Pic: Hany Marzouk.

A hotly-fancied Mayo team turned on the style at the expense of the Laois U-16 ladies at Duggan Park in Ballinasloe last Wednesday evening.

Racking up eight first half goals to quickly crush any notion of a shock win for the O’Moore County in this All Ireland 'B' football final.

Laois last reached this final in 2014, losing out to Tipperary on that occasion, and it was no surprise to manager Paul Mulhall that they had a similarly disappointing outcome at the end of this game.

“We came up here today and we knew exactly what we were going to be dealing with. Mayo are a powerhouse in ladies football and that goes all the way through the ranks” said the Clonaslee native after the game.

“If someone had told me last year when we took these girls over that we would have got to an All-Ireland final, we would have taken hand and all off them. We just did not turn up in certain sections today and Mayo were just superb all over the field. We were playing second fiddle from the moment the second goal went in”.

There were some positive moments in the early stages, most notably when Lisa Keane opened the Laois scoring with a good strike at the end of the team’s first attack, or any one of a number of excellent saves from Nadine Dempsey in the Laois goal.

However, those moments were all too fleeting, relative to the consistent excellence of a very impressive Mayo side that dominated the battle for possession, and so sent a wave of Mayo attacks towards the Laois goal in the first half.

Mayo needed to 'do more with less' but their radar was a bit off, as three excellent driving runs from Della Doherty at full forward opened up the Mayo defence but failed to yield that critical green flag that the team so badly craved.

“When you’re chasing a game, you need everything to go right for you, you need to convert everything” admitted Mulhall.

“In our semi-final against Limerick, we were 2-3 to no score down after a couple of minutes, but we just got an opportunist goal and that sparked us. We just couldn’t get that spark here today, we couldn’t get going”.

Trailing 8-5 to 0-2 at half time, a pair of good points from Lisa Keane immediately after the restart illustrated that the ability of this group, even if Mulhall regretted that they didn’t show it consistently over the course of the full hour.

“These girls have a lot more football than they showed here today” he declared. “I know the scoreline is terrible, but anyone that followed us during the year would see that these girls are a fabulous bunch, as a manager I’m so proud of them, they gave us everything and fought to the bitter end in all games”.

And that was exactly how it panned out, with a late attack from Della Doherty and Lisa Keane setting up Orla Knowles for the Laois goal. It was scant consolation, and Mulhall hopes that this is the sort of game that will stand to these young players in the long run, even if it was a difficult experience to endure last week.

“We got a lesson today, but we’ll take the lesson, we’ll go back and look at it, we’ll take it into next year and hopefully it’ll build us more than knock us”.

“Laois football is in a good place. I know you wouldn’t think it tonight the way we ended up, but Mayo are a powerhouse in ladies football and we have to learn from the likes of them”.

Player of the Game

The official award went to wing forward Leah Johnson but there was a natural style and class about Tara Needham’s work that could the eye of this reporter. Though with the same supply, it’s highly possible that Lisa Keane would have come close, as she kicked four points out of little or nothing.

Louise Dowling’s shot for a point that dipped into the top corner after five minutes. Not alone did it put Mayo six points up, it was a demoralising score to concede for a team that needed every break going.

Admirably, Paul Mulhall didn’t express any grievance at Mayo’s presence in a “B” championship, even though the Connacht county has been a powerhouse entity in the sport for a generation. Many will feel this win will shine a spotlight on that.

Another referee might have done a bit more to try and bring a team that was getting hammered back into the game, but in fairness to Shane Curley, he was up with play and appeared to call the game accurately and fairly to the end.

From a Laois perspective, the late goal was proof of the great character in the group, that they wanted to take something positive from the game.

Conceding the most disappointing goals early on, and so allow Mayo to relax into the game rather than putting them under pressure.