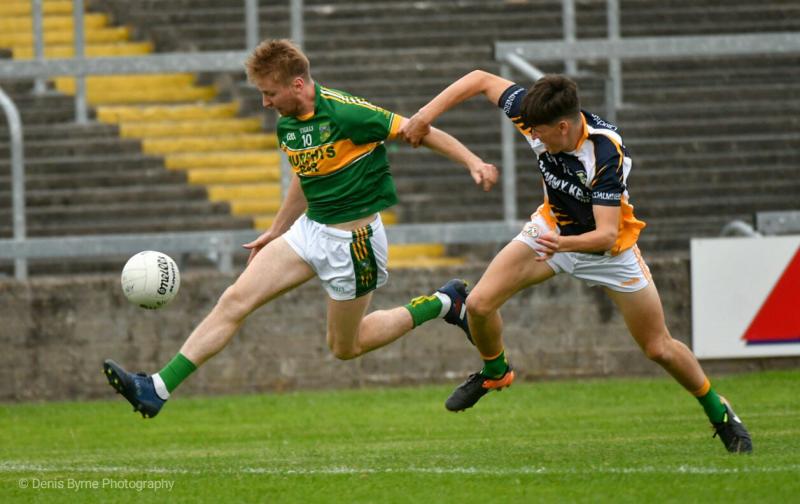 Ballylinan opened their Laois SFC campaign with a hard-fought win over Crettyard Gaels in O'Moore Park on Thursday night.

The game started at a decent pace, with Patrick Brennan pointing for Crettyard Gaels inside of a minute. The Ballylinan response was swift, as Gary Walsh won a free and duly slotted it over the bar.

Patrick Brennan soon had Crettyard Gaels back in front though, as he landed a good score into the breeze from 30 yards out. After an exciting start, the scoring slowed a little after that, and we had to wait five minutes for an equaliser.

It was worth waiting for, as Gary Walsh won the ball quickly for a shot off on the turn, and it sailed between the posts.

Walsh, who was the main threat early on, then won another free and popped that over the bar. The Crettyard Gaels response was probably the score of the half, as Cormac Murphy picked up the ball way out on the left wing and sprinted beyond a couple of tacklers before pointing.

Crettyard Gaels were then unlucky not to raise a green flag when a Murphy shot hung up on the breeze, and Patrick O'Reilly beat Aidan Walsh to the dropping only to see it hit the post and go wide.

Ballylinan started to take control after that, and a run of five points without reply saw them take a stranglehold on proceedings. Walsh and Cieran Farrell were central two it, and Walsh hit two and Farrell landed three from play as they went 0-8 to 0-3 in front.

The opening stages of the second half were closely fought, as neither side could get the upper hand. First Jamie Farrell and Evan O'Carroll traded points, and then it was Cieran Farrell and O'Carroll to hit the target, with three points still the gap.

O'Carroll then got his side within two thanks to a long-range free, but two quick-fire points from Gary Walsh, one a free, saw Ballylinan go four ahead.

It stayed that way until the final five minutes, when Crettyard sprung to life with two points in a little over a minute. Evan O'Carroll got the first from a free, and Patrick O'Reilly blasted the other over from just outside the penalty area, making it a two point game.

Crettyard Gaels needed to push on then, but in the final minute of normal time, Ballylinan got the clinching score. Gary Walsh won possession on the right wing and rounded a couple of markers before hammering a shot into the roof of the net off his left foot.

There was still time for late drama, as Cormac Murphy had a goal chance moments later for Crettyard Gaels, only to see Aidan Walsh pull off a brilliant save. Then, three minutes into added time Evan O'Carroll was fouled for a penalty, and Cormac Murphy slotted home to get his side back within two.

Crettyard Gaels needed another goal to get something from the game, but Ballylinan managed to hold them at bay and secure the win.