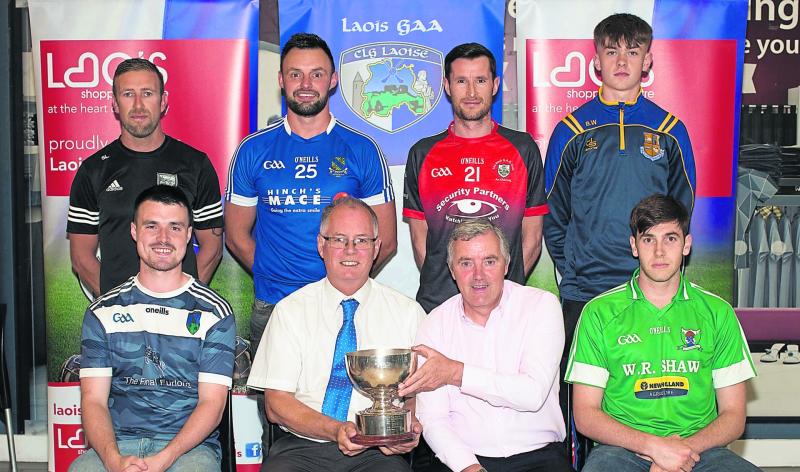 Representatives of the Intermediate teams at the championship launches recently.

An intriguing Laois IFC championship gets underway this weekend, as one of the most open competitions in recent years begins in earnest.

For the most part, the IFC has been dominated by the teams coming down from the IFC, who invariably go straight back up. You have to go back to Ballyfin's victory in 2014, which denied Timahoe an immediate return, for the most recent example of a team not bouncing straight back up.

Mountmellick Gaels now take on the mantel of favourites by default, having been relegated after a dramatic playoff final with Arles-Kilcruise last year.

They appear to have responded to that setback reasonably well, as they picked up six wins in ACFL Division 1B. They may have ended third from bottom, but were still only four points off Killeshin in third place.

That their status as favourites is under threat is not a reflection on regression on their part, but rather the progress of some of their opponents in the Division.

Courtwood are developing at an impressive pace, and have already secured the Division 2 title with a comprehensive win over the same St Joseph's side which will compete in the IFC this year.

The development of Courtwood has come from the glut of exciting young players progressing through the St Paul's underage setup, coupled with a couple of transfers in Matt Kelly and Luke Doran.

Courtwood are mobile, have scoring forward and are full of confidence. Their credentials will be strongly tested in the opening round when they meet Mountmellick, in what should be an interesting game.

Outside of those two, Portlaoise continue to be a threat at this level as they bring through another handful of young footballers, perhaps not yet ready for senior level, but certainly good enough to make an impact at intermediate level.

Having come so close last year, they will definitely be in the mix once again, while Rosenallis are another team, and indeed club, still rising on an upward curve.

Timahoe, if Brendan Quigley is forced to sit out the championship, will likely struggle to bring an end to their extended stay in the competition.

St Joseph's prospects will depend on who they lose to the senior team, but their display in the Division 2 final suggests they might struggle, as could Barrowhouse and The Rock.

Portlaoise, Courtwood and Mountmellick Gaels all look the most likely challengers for now, with little to choose between the three ahead of an exciting championship campaign.