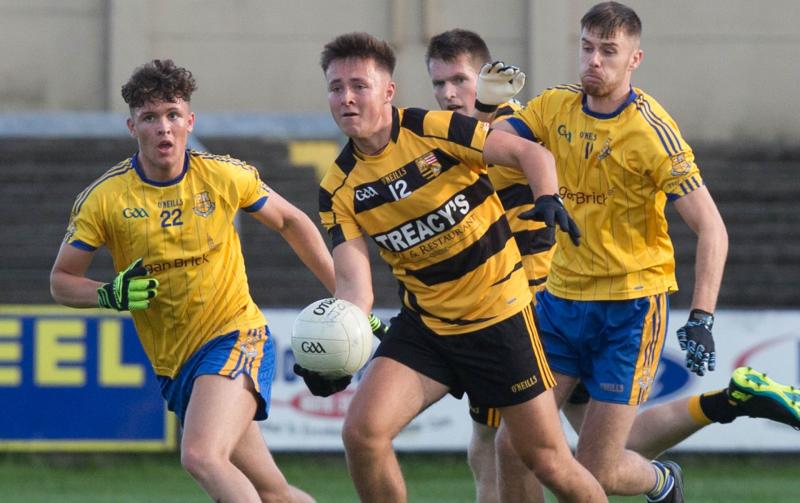 PJ Daly in possession for The Heath against St Joseph's. Pic: Alf Harvey.

St Joseph's turned in an impressive second half performance to begin their Laois SFC campaign with a six point win over The Heath.

The Heath made the brighter start, as Evin Keane was fouled and then duly pointed the free. Less than a minute later their early advantage was doubled, as Shane Forde popped one over from 25 yards out.

St Joseph's took their time to settle, but Dylan Doyle finally got them up and running with a point, and then goalkeeper Dan Dunne calmly slotted over a long-range free to level the scores.

Evin Keane was then fouled off the ball and landed his second free after a lull in the scoring due to a few injuries, but the game really took off then. A strong St Joseph's move down the right wing ended with Michael Keogh advancing on goal from a tight angle, but his powerful shot flew into the roof of the net for a superb goal.

That put St Joseph's ahead, but the lead didn't last too long. A little over a minute later The Heath's Brian Ging jinked his way past a couple of St Joseph's defenders before curling a shot off the outside of his boot into the bottom corner.

The Heath followed that score with a couple of frees, and they now lead by three. Brian Daly and Ciaran Booth then traded points to keep the gap between the teams the same, but St Joseph's managed a final kick in injury time.

Centre-forward Michael Keogh managed three kicks at goal in a little over two minutes, and two of them hit the target to see St Joseph's trail by just one at half time, 1-6 to 1-5.

Joseph's carried that momentum into the early stages of the second half, as Brian Daly fisted a point over the bar from a tight angle to level the scores in the 32nd minute.

The Heath hit back well to losing their lead, as Daithi Carroll won a free which Evin Keane pointed, and then Keane landed his first from play to send them two ahead.

If The Heath were delighted to re-take the lead, they didn't have long to enjoy it, as St Joseph's had their best spell of the game after that. A good passing move found Dylan Doyle unmarked on the edge of the area, and he rolled a shot past JP Nerney.

Points quickly followed from Dean Brophy, Mattie Campion and Enda Butler, as a two point deficit was turned into a four point lead in the space of five minutes.

A four point lead turned to five and then six as Brian Daly (free) and Michael Keogh stretched the lead even further, with The Heath struggling to find an answer to the St Joseph's dominance.

St Joseph's didn't need to take any risks after that, and heading into the last few minutes they managed the game well to secure an opening round win.