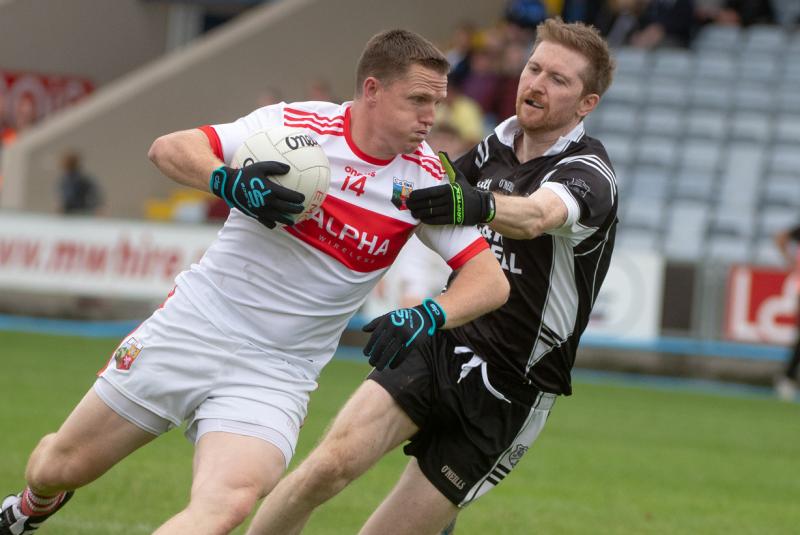 A last minute free from Darren Strong sealed a dramatc draw for Emo on Sunday afternoon, as his shot from the 45 yard line hit the post and went over the bar.

Arles Killen had to line out without star player Donie Kingston and it didn’t help their chances when keeper Michael Leigh was sent off after 50 seconds of play.

Emo got onto the attack directly after the throw in as Padraig Kirwan passed to Jack Owens only for his shot at goal to be saved. It was then deemed by referee Maurice Deegan that Michael Leigh struck David Gorman, resulting in a red card.

Emo took control for the first 20 minutes of the game and got their first point after two minutes thanks to a free from Paul Lawlor.

Padraig Kirwan was running at the Arles-Killeen defence and was rewarded when he won another free for his side, and Evan Costello put over the resulting free. Paul Kingston did respond at the other end with a free for Arles-Killeen but it only took three minutes for Emo to respond.

This they did in great fashion as Paul Lawlor’s shot at goal hit the post and after three more attempts at the goal the shot was finally snuck in past Willie Moran in the Arles goal. Emo lead 1-2 to 0-1 after ten minutes.

Dermot Julian then responded with a point for Arles and it was only a minute later when the Arles men caught the Emo defence asleep as Paul Kingston was left alone in front of goal. An Arles free was taken quickly and found Kingston free to slap the ball into the Emo net.

Kingston began to find some space and added two points before the break. Darren Strong did respond for Emo and the teams with in at break 1-5 a piece.

Arles were quickest off the mark in the second half as Conor Keightley pointed. Donie Brennan followed up with another for Arles before Paul Lawlor responded for Emo.

Emo then had a great goal chance at the other but Nigel Murphy pass across the goal was just missed. Sharpshooter Donie Brennan then followed up with another point to leave Arles leading 1-10 to 1-6 after 40 minutes.

However, Emo had more football to play as Paul Lawlor and Shane Murphy pointed before Darren Strong levelled up the game after 57 minutes. Donie Brennan then won a free for Arles which was converted by Jason Enright.

With time almost up, Emo had one last chance and it was a Darren Strong free that sealed a last gasp draw for a gallant Emo side.