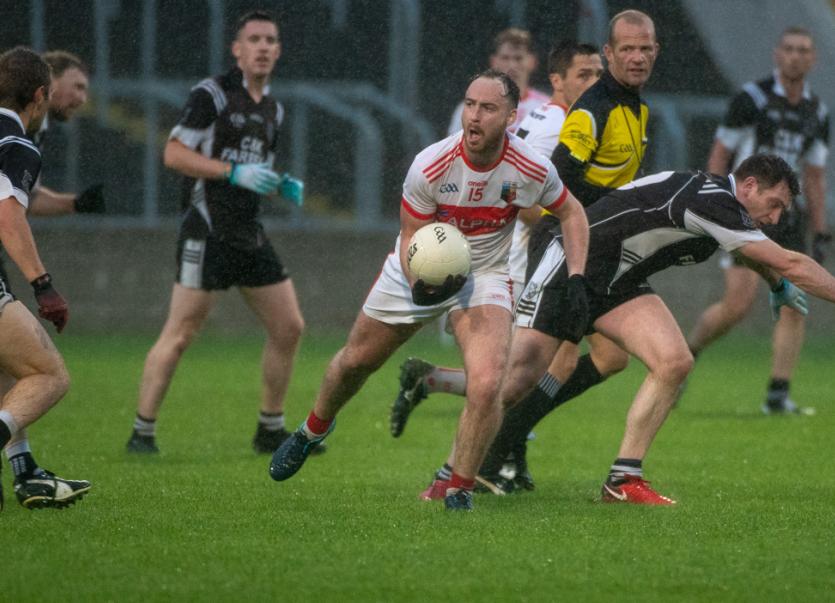 Emo made no mistake the second time of asking as they booked their place in the Winners Section of Round 2 of the SFC following an impressive eight point win over Arles-Killeen in O’Moore Park on Wednesday evening.

Emo set the scoreboard in motion in O’Moore Park on Wednesday evening with Paul Lawlor twisting and turning through the Killeen defence before coming back onto his trusty left boot to open the scoring.

Emo continued to press forward and with the wind behind their backs in the opening half they added a further three points through Nigel Murphy, Darren Strong and Evan Costello before Arles-Killeen could even get on the scoresheet.

Arles-Killeen announced their arrival to the game with a stunning goal from Paul Kingston. Donie Brennan played a quick free into Kingston who, from outside the twenty-metre line, sent a rocket into the top left corner to set Killeen underway with nine minutes played.

Emo wasted no time in getting back on top, Paul Lawlor pushing their lead back to two points a minute later. Points followed as Costello fisted over, Stephen Norton found his range, as did Jack Owens with a booming score, before Costello and Owens brought their tally to ten points eighteen minutes in.

Arles-Killeen responded with a close-range Donie Kingston free, but Emo continued to dominate the proceedings as Evan Costello cooly slotted a free from outside the forty-five and Nigel Murphy sent over his second as Emo went eight points clear five minutes before the break.

Killeen closed out the half with Jason Enright notching a free, leaving Dermot Julian to pull a goal back in the first minute of injury-time when he rolled the ball into the net from point-blank range. Paul Lawlor sent over a free on the stroke of half-time as Emo held a 0-13 to 2-2 lead at the interval.

Paul Kingston grabbed his second goal on the resumption, sending it across the keeper and into the back of the net to make it a two point game a minute into the half.

Padraig Kirwan and Costello added scores either side of an Enright point, but Killeen narrowed the deficit to the minimum through a point apiece from the Kingston brothers with eighteen minutes to go.

Emo steadied the ship with a Paul Lawlor free, but another free from Donie kept the minimum breathing space between the sides with nine minutes remaining. Emo, and in particular Stephen Norton, came to the fore in the final minutes.

A string of passes led to Norton scoring a sizzling goal - buried as far into the top right corner as it could possibly be - before following up with a further two points. Lawlor tapped over a free a minute from time, leaving Norton to close-out the game with his fourth of the evening in the second minute of injury-time as Emo deservedly ran out eight point victors.