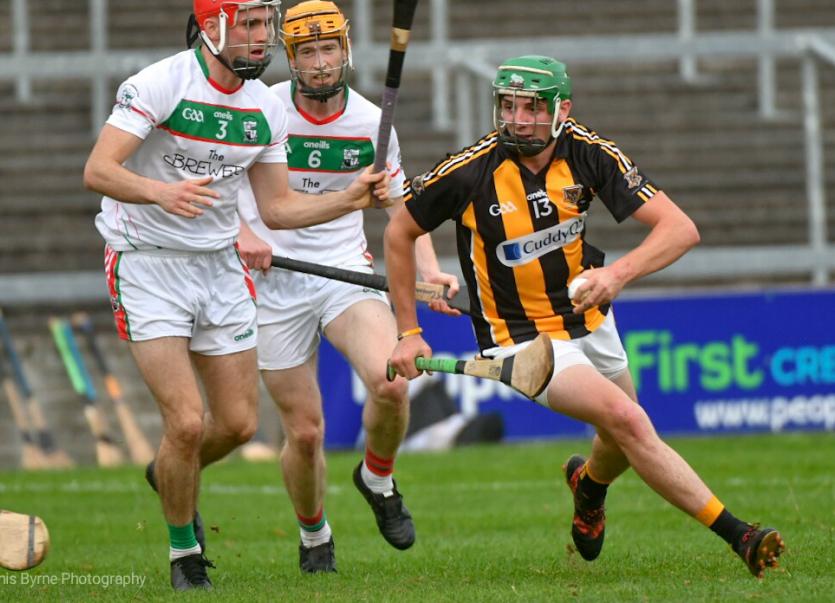 Camross held off a furious second half comeback from Rathdowney-Errill to keep their Laois SHC hopes alive in an enthralling Round 2 clash at O'Moore Park tonight.

A loss here would have left Camross in serious trouble of crashing out of the championship, but they got the win thanks to an incredible first half display that proved to be just enough in the end.

Camross sprung a surprise with their team selection, as veteran 'keeper Tadhg Doran was dropped and Thomas Dunphy got the nod, while Gearoid Burke, Tomás Burke, Darrell Dooley and Oisin Bennett were all drafted into the starting team.

Needing a win, they overwhelmed Rathdowney-Errill in the opening stages. Once they settled into the game, Zane Keenan opened the scoring with a free, and then a good run from Eoin Gaughan set up Oisín Bennett for the opening goal in the fifth minute.

Ciaran Collier and Mark Dowling quickly added points as they pulled six clear, with Rathdowney-Errill struggling to get anything going in attack. Shane Shane Dollard finally opened their account in the seventh minute, and then Daithi Poynton added another.

It failed to spark a sustained period of pressure though, as Zane Keenan landed the first of a series of long-range points, and then they got their second goal. Mark Dowling raced in on the right side and his shot squirmed under Damien Madden, himself a late goalkeeping replacement for Noel Brennan.

Mark Kavanagh then pointed either side of a fine Niall Holmes scores, but Camross were still well in control. They were hounding Rathdowney-Errill into mistakes and were much better drilled in their play, whereas Rathdowney-Errill looked devoid of confidence and strategy.

Camross just kept building their lead after that, and with the half almost up, they were twelve points ahead, 2-12 to 0-6. Rathdowney-Errill looked a beaten team, but they threw themselves a lifeline before the break with a brilliant goal from Tadgh Dowling. That still left them trailing by nine though, 2-12 to 1-6, heading for the dressing rooms.

Camross got off to bright start after the break, Mossy Burke pointing with second of the restart, but then three points on the trot from Tadgh Dowling and Mark Kavanagh (two frees) gave Rathdowney-Errill a timely boost.

Three in a row quickly became five, as Paddy Purcell landed one from play and Kavanagh added a 65, and a rejuvenated Rathdowney-Errill were back within five.

Camross looked to the bench to arrest the slide, and Dean Delaney, seconds after coming on, landed a point to break the run of Rathdowney-Errill scores. Shane Dollard and Ciaran Collier traded points in the space of a minute before Mark Kavanagh hit two more, one a brilliant effort from out on the right wing, as the gap came down to four.

Zane Keenan (65) and Shane Dollard both pointed to keep the four points between the sides heading into the last four minutes, and then a Mark Kavanagh and Paddy Purcell halved the deficit with a point apiece within seconds of each other.

Some sloppy play out of defence robbed Rathdowney-Errill of the chance to narrow the gap further, and then a Ciaran Collier point put Camross three ahead again with just two minutes to play.

A free from Keenan in the final minute of normal time looked to be the clincher, as they went four ahead, but then Rathdowney-Errill won a 21 yard free. Mark Kavanagh went for goal, but his shot was stopped on the line and Camross scrambled the ball away.

That was as close as it got for Rathdowney-Errill, as Dean Delaney added a late insurance point for Camross.