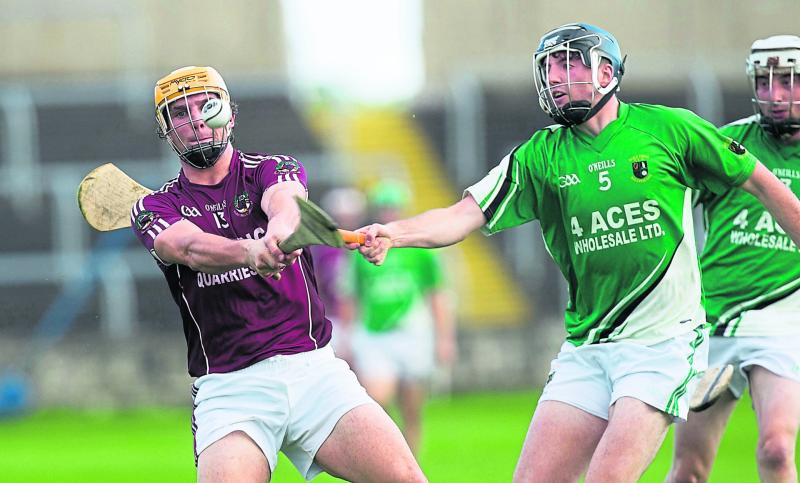 Ballinakill recorded their second win on the trot as they ran out nine-point victors overs Ballyfin Gaels in the first of the double-header in O’Moore Park on Saturday evening.

Ballinakill built on their win over Abbeyleix last time out to lay second in the group, level on four points with Borris-Kilcotton but behind by a single point on points difference. Last year’s Senior A winners, Ballyfin Gaels, on the other hand fell to their second straight defeat.

Despite what the scoreline may suggest, it was an even clash right up until Ballinakill’s goal in the forty-third minute. Even after that, Ballyfin Gaels rallied to close the gap from six points to two with four minutes to go, but Ballinakill finished strong with two goals in the dying minutes.

Ballinakill opened the scoring forty seconds in when Eamon Jackman sent over a long-range free to set them underway. Ballyfin Gaels sent over the next three through a brace of Michael Bermingham frees and a brilliant Eanna Lyons point from right out on the sideline to push them into the lead inside five minutes.

The sides then went blow-for-blow with Dan Bergin getting two in as many minutes and a single from Cha Dwyer, but David Connolly’s long range point followed by Bermingham and Redmond McEvoy gave Ballyfin a slender one point lead fifteen minutes in.

Seamus Fitzpatrick, a huge Cha Dwyer point and a composed shot by TJ Lalor sent Ballinakill into a one point lead - despite the best efforts of Bermingham who raised a white flag from a tricky angle near the sideline to keep the deficit at the minimum approaching half-time.

Shane McEvoy and Jackman pointed to put them three ahead two minutes before the break, but the final three scores of the half went to Ballyfin Gaels through Ricky Quillinan, Louis Duff and a Bermingham free to send them in level at ten points apiece.

Redmond McEvoy and Jackman traded fire on the resumption, before Bermingham’s sixth of the day edged Ballyfin into the lead five minutes into the half. In the forty-third minute the game was turned on its head when Cha Dwyer’s shot from out the field was dropped into the net by goalkeeper Eamonn Duff as Ballinakill re-took the lead.

Ballinakill pressed on and built on their newfound lead as they slotted the next four points through Eddie Dwyer (2), Jackman and Bergin as they went six points clear heading into the final ten minutes.

Ballyfin Gaels rallied in the final stages and narrowed the gap to two points with four minutes to go through a brace of placed balls from Bermingham and Lyons - but that was to be as close as they would come as Ballinakill finished strong.

Eamon Jackman nailed a penalty into the top right corner of the net after Seamus Fitzpatrick was fouled, substitute Tony O’Shaughnessy raised a white flag and Jackman put the final nail in the coffin with their third goal, his second, in the third minute of injury-time as Ballinakill ran out nine-point victors.

Read also: Full list of all the top scorers in the Laois SHC after Round 2