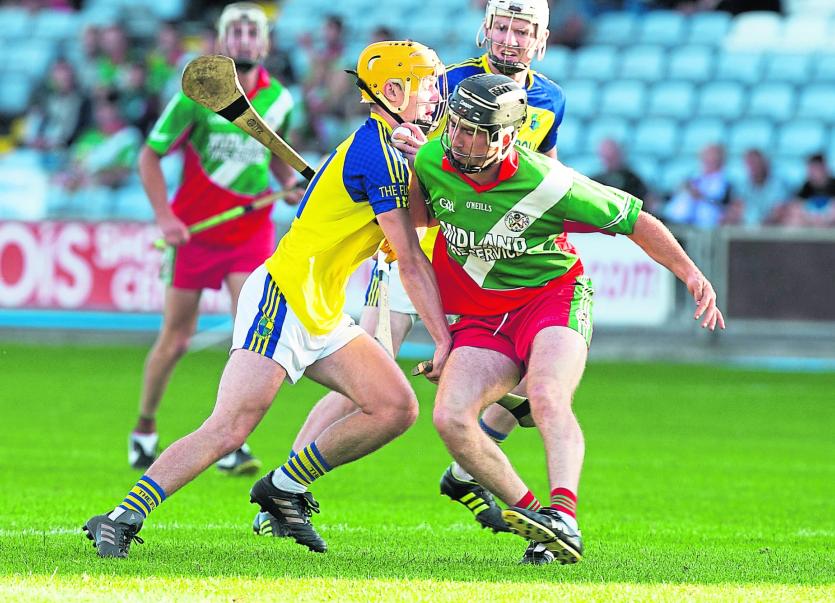 Rory McEvoy on the attack against Borris-Kilcotton. Pic: Alf Harvey.

Borris-Kilcotton picked up their second win of the Championship as they got the better of Abbeyleix with four points to spare in O’Moore Park on Saturday evening.

Borris-Kilcotton’s hopes of an automatic semi-final spot remain on track as they head into the final game against Ballinakill with both assured a quarter-final place, while Abbeyleix will prepare for Ballyfin Gaels knowing that the winner will go through to the quarter-final and the loser into a relegation playoff.

Abbeyleix made a dream start to the game as they slotted the first five points of the game to take an early lead.

Rory McEvoy opened the scoring two minutes in with his first of the day, frees from full-forward Eoghan Fennelly (2) and goalkeeper Enda Rowland followed, as did a single from Ciaran Carroll to put Donal Franks’ men in a strong position with twelve minutes played.

It took Borris-Kilcotton until the fifteenth minute to open their account, Aaron Dunphy splitting the uprights to set them underway, the first of six on-the-trot as Borris-Kilcotton remarkably over-turned the early deficit to edge into the lead.

Stephen Finan, a brace from Dunphy - the second of which came after an excellent save from Rowland - and two frees from PJ Scully had Borris six points to five ahead twenty-five minutes in.

Eoghan Fennelly and Scully exchanged frees, and then Borris-Kilcotton raised the first green flag of the day when Paddy Whelan pulled on the ground and into the corner of the net.

Neil Foyle put them five clear a minute later, and they almost had a second goal directly after had it not been for a superb save from Rowland to deny Scully in injury-time.

Fennelly and Rowland sent over a pair of frees for Abbeyleix, and Stephen Finan landed his second of the half from wing-back as Borris-Kilcotton went in four points in front at the break on a scoreline of 1-9 to 0-8.

Rowland restarted the half by sending over a free from his own fifty-metre line, but Neil Foyle annulled it two minutes into the half before Paddy Whelan increased their lead.

Ciaran Carroll sent over his second for Abbeyleix and Rowland rifled two long-range frees to bring it back to two points with thirty-five minutes played.

A lively ten minutes followed as Abbeyleix sent over four frees from the clinical Fennelly and McEvoy brought his tally to three, while Scully converted two frees and a dinger of a sideline cut, Dunphy a brace and Neil Foyle recycled over after another stunning Rowland save as Borris-Kilcotton led 1-17 to 0-18 with just over ten minutes to play.

Borris-Kilcotton pushed their lead out to four through Paddy Whelan and a Scully sixty-five - after Rowland somehow turned away another goal-bound shot. The Laois shot-stopper converted his sixth free of the day three minutes from time, but Dunphy replied to keep the Borris lead at four points.

PJ Scully added his second sideline cut from forty-metres out on the stroke of full-time to push Borris out of sight, but Dayne Peacock closed it to four points with the last score of the game as Borris-Kilcotton deservedly ran out four point victors.

Read also: Full list of top scorers after Round 2 of the Laois SHC