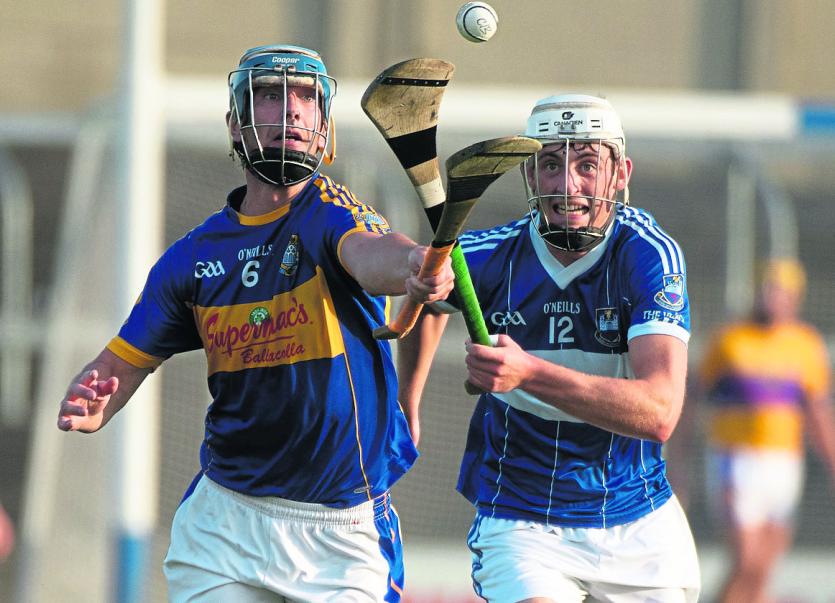 Last year’s beaten senior hurling finalists Clough-Ballacolla look like they’ll be contenders once more for the Bob O’Keefe Cup, as they pulled off a big win over Castletown Gaels.

The Gaels side came in to this game off the back of a surprising win over title holders Camross, but they couldn’t live with a hungry-looking Clough-Ballacolla outfit.

Clough-Ballacolla got off to a terrific start, as they found the back of the net inside two minutes. Tim Delaney’s shot was saved by Patrick Mullaney, but Robbie Phelan was lurking near the square and scored the rebound. Stephen Maher added a point to the goal, before both teams had a ten minute spell of poor shooting.

Wille Hyland ended the drought with a free, before Castletown Gaels finally began to find their feet. Great play from Eoin Peters allowed Ben Conroy a bit of room to manoeuvre a shot, and he split the posts. Dylan Conroy slotted over a free for Castletown Gaels, but they’d only manage one more point throughout the remainder of the half, as Clough-Ballacolla took complete control.

Stephen Maher punished Castletown Gaels with a point after he collected a short sideline ball unmarked, before Stephen Bergin raised a second green flag for Clough-Ballacolla, thanks to good play from Tim Delaney and Willie Dunphy.

Willie Dunphy scored a nice point after some dogged work by wing-back Lee Cleere, and Stephen Maher added another. Brendan Reddin got Castletown Gaels back on the scoreboard, but Clough-Ballacolla finished the half strongly, with Aidan Corby, Willie Dunphy and Willie Hyland (free) all firing over the black spot.

Clough-Ballacolla went in with a deserved 2-8 to 0-3 advantage.

Castletown Gaels required a fast start to stage any sort of a comeback, but it was the very opposite, as they would go scoreless for twenty-four minutes of the second half due to some very wayward shooting.

Willie Hyland opened the scoring for the second half through a placed ball, and he added two more frees to his name shortly after, winning the third one all by himself. A few minutes later John Dwyer accelerated through the side of Castletown Gaels’s defence and bore down on goal, but opted to take his point when the goal was at his mercy.

Castletown Gaels’s tried and tired, but they just lacked any sort of composure in front of goal. Some quick hands from Martin Phelan and Brendan Reddin put Dylan Conroy through on goals, but he shot straight at Clough-Ballacolla’s Danny Hanlon.

Points from John Dwyer and Aidan Corby pushed Clough-Ballacolla lead out to a margin of sixteen, before Castletown Gaels finally found hit the target through a free from substitute Aaron Gaughan.

Clough-Ballacolla nearly came up with an immediate and ruthless response, as Jordan Walshe fed Stephen Maher, but Patrick Mullaney in goals pulled off an excellent save to deny him.

Stephen Maher pointed the 65’ that followed, before Ben Conroy, who had been excellently curtailed by Ronan Broderick, grabbed Castletown Gaels’s fifth. Maher and Conroy swapped frees as we headed into injury-time, and Clough-Ballacolla got the last score, as midfielder Aidan Corby pointed his third of the day.

Clough-Ballacolla will now seek revenge against Camross for last year’s county final defeat, while Castletown Gaels meet Rathdowney-Errill in a must-win clash for both.

Read also: Full list of top scorers in the Laois SHC after Round 2