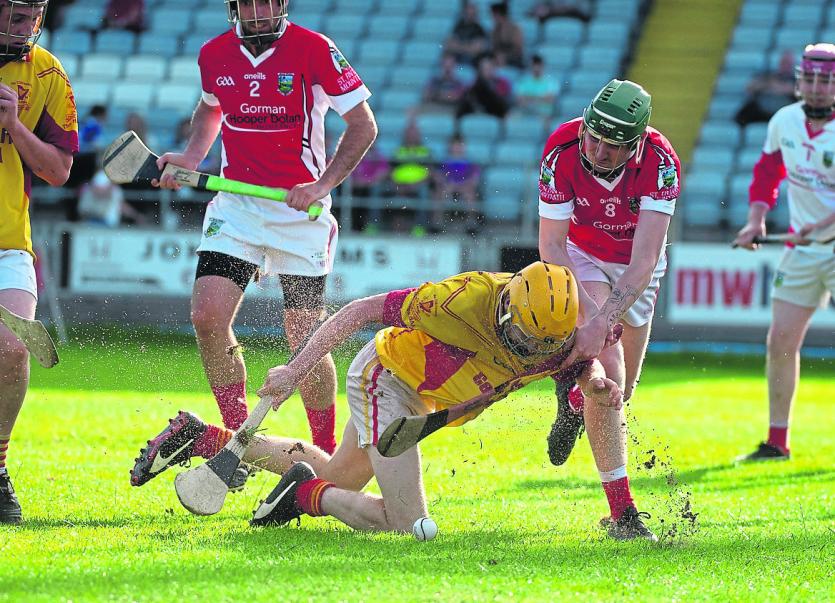 Action from The Harps v Mountrath in the SHC 'A'. Pic: Denis Byrne.

Two early second half goals weren't enough for Mountrath, as a solid performance from The Harps saw them move to the top of Group A in the Laois SHC 'A'.

Michael Lanigan pointed the opening score thanks to a 65’, and he added another minutes later through a free as The Harps got off to a bright start.

Mountrath got on the scoreboard through a well-struck free from distance by centre-back James Hyland, but The Harps replied with three unanswered points, one from Richie Saunders, and two placed balls from Lanigan.

Mountrath would stick with the Durrow and Cullohill men for large parts thanks to their efficiency in front of goal, and Colm Lanham got the first from the penalty spot. He sent a brilliant shot to Ross Young’s top left hand corner, as they reduced the gap to the minimum. They wouldn’t score for a further eleven minutes though, as The Harps dominated.

A point apiece from Richie Saunders and Michael Lanigan (free) was followed with their first goal of the game, as Darren Maher found the back of the net.

Michael Lanigan and Ciaran Comerford raised further white flags, as St Fintan’s Mountrath now found themselves eight points down, when they were only one down seven minutes previous.

A super John Brophy point was sandwiched between scores from Dylan Russell and Wayne Sydes, as St Fintan’s Mountrath trailed 1-3 to 1-10 at the break.

They ate into that lead when they marched onto the pitch for the second period though, as Dylan Russell grabbed his second from a free, before Mick O’Brien popped up with a goal.

Richie Saunders replied with a point for The Harps, but St Fintan’s Mountrath again found the back of the net. James Hyland’s long ball spelled trouble for The Harps’s defence, and they failed to deal with it, as nobody touched the ball on its way and Hyland claimed the goal.

The minimum separated the sides once again, but The Harps upped it a gear to put space between them once again. Lanigan struck over a free, before Saunders picked up the ball close to goal, cut inside, and finished. Michael Lanigan and Eoin Clancy split the posts once more for The Harps.

Brandon Russell swung over a free for St Fintan’s Mountrath after the handbags were sorted, but The Harps hit back with a Fionn Whelan point and a John Brophy goal. Brophy caught Lanigan’s long free in, and expertly placed past Hetherington. The sides were fairly evenly matched for the remainder, as The Harps won by eleven.

Read also: Top scorers in this year's Laois SHC after Round 2