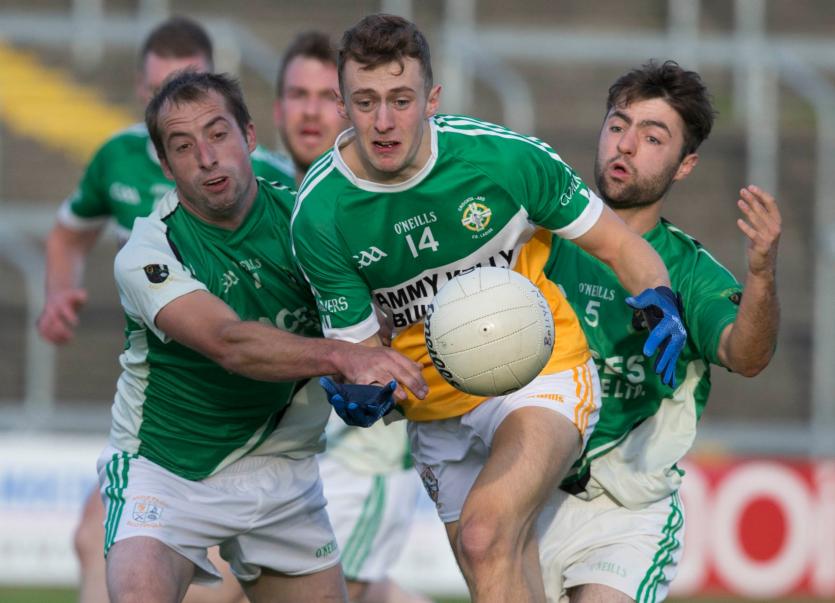 Crettyard Gaels have earned their way back into Round 3 of the Laois SFC, after they held off Ballyfin Gaels in a closely fought encounter in O'Moore Park tonight.

Ballyfin Gaels had gotten off to a bright start, with James Finn popping over the opening score in the first minute. Crettyard Gaels didn't take long to respond, with a Evan O'Carroll floating over a free a little over 60 seconds later to level it up.

Two scores in two minutes was a good start, but it wasn't a sign of what was to come in what proved to be a scrappy opening half. Paul Simms tapped over from close range soon after to put Crettyard Gaels back in front, and then a good run and finish from Evan O'Carroll made it 0-3 to 0-1.

Ballyfin Gaels were struggling to get anything going in attack, and there was nearly ten minutes of a gap between their first and second scores, as James Moore slotted over a close-range free.

That was canceled out almost immediately by a nice point on the run by Cormac Murphy, and then midway through the half another O'Carroll free had Crettyard Gaels 0-5 to 0-2 to the good.

Ballyfin Gaels really needed to kick themselves into gear, and wing-back Darragh Connolly provided the inspiration as he finished off a good move with a point from an acute angle.

Moments later James Finn was baring down on goal, but opted to fist over the bar rather than take on a shot for goal, and Ballyfin Gaels were now within one.

Unfortunately for them, that was their final score of the half, as some poor shooting soon halted their momentum. They were almost gifted a goal too, as Jeff Moran got caught in possession and lost the ball, but Ben Conroy's toe-poke from a tight angle hit the post, and Crettyard Gaels could clear.

They then finished out the half that bit stronger, as fine score from Cormac Murphy and a fourth of the half from O'Carroll, another free, saw them 0-7 to 0-4 to the good heading for the dressing rooms.

Ballyfin got a bright start to the second half, as James Moore pointed an early free and then he set up Ricky Quillinan for another moments later. Evan O'Carroll hit back for Crettyard Gaels, before another James Moore free kept Ballyfin Gaels hot on their heels.

The problem Ballyfin Gaels were having was they just couldn't get themselves back on level terms. Crettyard Gaels made them regret that, as O'Carroll pointed a free and Cormac Murphy hit a peach of a point from play.

Now three ahead, they were again reeled back in, as James Moore tapped over a couple of frees for Ballyfin. Evan O'Carroll and Ricky Quillinan then traded scores, before O'Carroll brought up his eighth point with a good score from the left wing.

Within seconds, however, Louis Duff had cancelled that out, and with five minutes to go there was still just one point between the teams.

With the game now in the balance, it was Crettyard Gaels who came up with the winning scores. Ballyfin Gaels left themselves exposed at the back as they chased the scores they needed, and Evan O'Carroll slotted over a couple of late frees, one of which came after Philip Brennan's goal to seal the win was called back for a free.

Ballyfin Gaels never looked like getting a goal, and they now head into the relegation semi-finals in two weeks time.