Clinical Courtwood impress once more with one-sided win over Timahoe 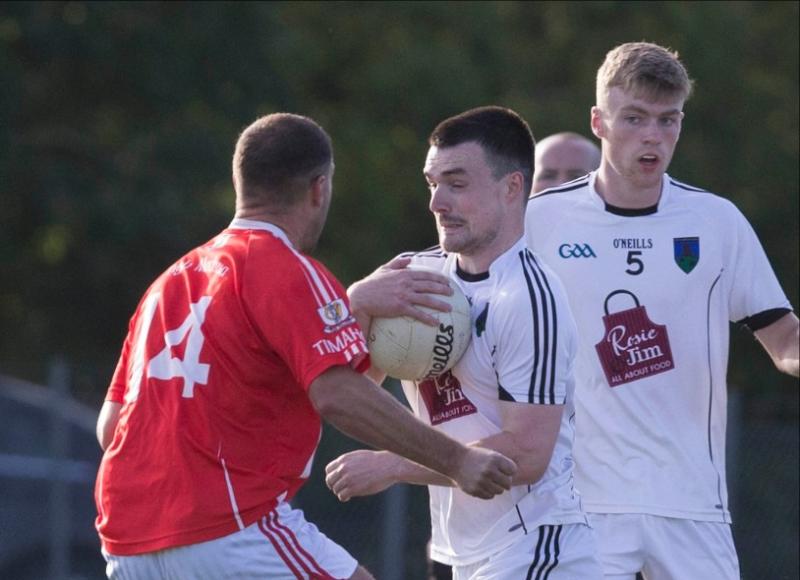 Conor Hogan on the attack for Courtwood on Thursday night. Pic: Alf Harvey.

After just squeezing past Mountmellick in the opening round, Courtwood were far more ruthless this time out, putting Timahoe to the sword in very impressive fashion on Thursday night.

Billed as many peoples favourites to take the intermediate crown this year, the men in black and white emphatically underlined their credentials with a dominant win leaving Park Ratheniska with twelve points to spare.

Courtwood got off to the most perfect of starts finding the back of the net within the first minute. An Alan Kinsella shot hit the post and Conor Hogan was quickest to react firing home in what was the game’s opening attack.

Seven minutes later Kinsella was again involved in Courtwood’s second of their three first half goals. Having worked his way through the Timahoe rear-guard he calmly laid the ball on to the inrushing Niall Dunne who palmed home.

Courtwood’s third green flag would follow in the 17th minute. Dunne this time turned provider, setting up Kinsella who drilled home from close range, effectively putting the contest to bed inside the game first quarter.

Timahoe, who were opting for a defensive set up, were failing to get any traction up front. Robbie Foyle bucked that trend in the 22nd minute however with a well taken score from 40 yards seeing the score board read 3-5 to 0-2 on the 20 minute mark.

Timahoe, to their credit, began to show some life as the first half drew to a close. Ruairi O’Connor drilled home after pouncing on a poor Courtwood kick out to raise a green flag for Timahoe in 24th minute. The impressive O’Connor added further points in the 26th and 30th minute to see the sides go to the break with Courtwood leading 3-4 to 1-6

Courtwood hit the first two scores of the second period through Mathew Kelly and Niall Donoher. Donoher, who was superb all evening, directed all that was good about Courtwood with the Laois man popping up all over the pitch.

Both sides were reduced to 14 in the 35th minute when Conor Whelehan for Timahoe and Robbie Flynn for Courtwood were shown red for an off-the-ball altercation.

It was Timahoe who suffered the most however with the sending off, as it gave more space for marauding half-back Sean O’Flynn and Donoher to exploit.

Donoher hit two back-to-back scores for Courtwood in the 44th and 45th minute with the score line now reading 3-12 to 1-6 with 15 minutes left.

Timahoe hit the next four points in a row as Courtwood eased of the gas. Points from Robbie Foyle, who tried hard throughout and Ruairi O’Connor gave the scoreline a bit more respectability as the game headed into its final minutes.

Courtwood’s Niall Dunne bagged a brace of points in the last few minutes to top off an excellent personal performance in front of the watching Laois manager John Sugrue to leave the final score line reading 3-14 to 1-8.

Courtwood march on with two wins out of two and their mix of experience and youth along with a potent forward line and attacking defence means they are the team to beat in the race to claim senior status for next season.