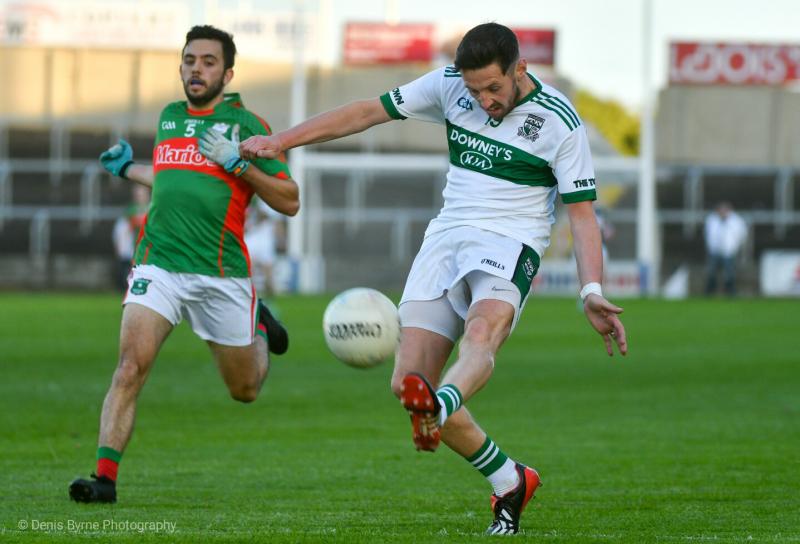 Portlaoise are safely through to the quarter-finals of the Laois SFC after a comfortable win over Graiguecullen tonight in O'Moore Park.

The reigning champions hit a purple patch just before half time, when a run of 1-6 without reply put them ten up at the interval, and there was to be no catching them from there.

This game proved to be a bit of a slow burner, with the only score of the opening five minutes coming from a Brian McCormack free.

Graiguecullen eventually hit back with a long-range free from goalkeeper Danny Bolger, but Portlaoise replied to two quick-fire points from Craig Rogers. Graiguecullen then lost co-captain Jimmy Bolton to injury, and nearly ten minutes would pass before the game saw another score.

When it came it was a well-worked Graiguecullen point, created by a surging run from Jamie Sheehan. The ball was eventually worked to Paul Mulready, and he split the posts from 30 yards out.

Rogers made it a hat-trick of points for him after that, but an excellent free from Jamie Parr kept Graiguecullen hot on their heels, with just a point between the teams.

Scott Lawless and Brian Byrne were next to trade points, but the rest of the half belonged to Portlaoise, and in particular Bruno McCormack.

Portlaoise's great ability is to be able to quickly move through the gears and put a game to bed in a matter of minutes, and this is exactly what they did here. It started with a Bruno McCormack free, and he quickly added another from play.

He followed that up another two points, one each from either wing, and then Scott Lawless tapped over a free. Bruno brought his personal tally to six with his third free of the half, then to top it off, a wonderful ball over the Graigue defence from Benny Carroll allowed the Portlaoise veteran to palm it to the net, and at half time Portlaoise lead 1-11 to 0-4.

The opening ten minutes of the second half was quite poor, with Graigue getting the first score from a fine Trevor Collins effort. Benny Carroll responded for Portlaoise, before Danny Bolger got forward to float over a 45 for Graiguecullen. However, that was soon cancelled out by Chris Finn, and the ten points which separated them at half time remained the difference by the 40 minute mark.

There was no onus on Portlaoise to force something to happen, and Graiguecullen looked to stir themselves to life when Brian Byrne and Jamie Parr tapped over close-range frees within a minute of each other.

Graiguecullen should have added another soon after, but Portlaoise forced a turnover 14 yards from their own goal, and in a blistering counterattack lead by Gareth Dillon, replied with a point from Scott Lawless.

Moments later, Kieran Lillis launched one over from outside the 45, and there was ten points between the teams once more.

There was little to suggest that Graiguecullen could launch a comeback for the ages, and so it proved, as Portlaoise ran out comfortable winners.