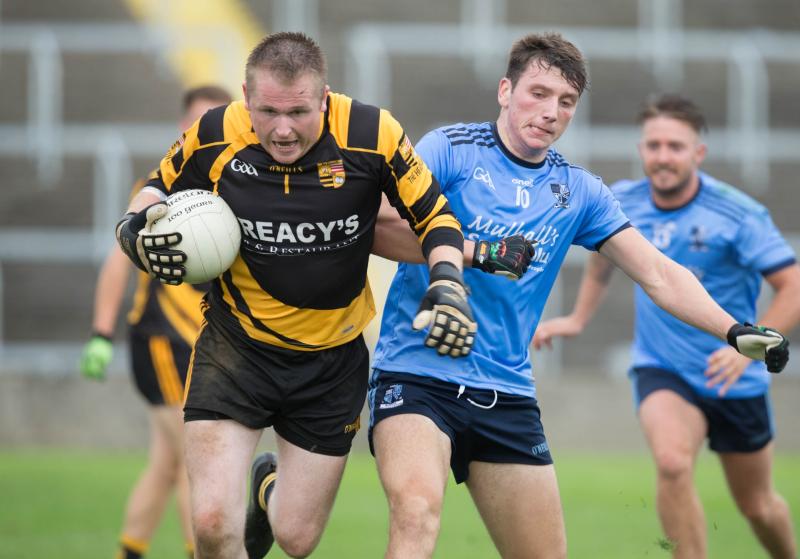 Ballyroan Abbey booked their place in Round 3 of the Laois SFC, as some clinical attacking play saw them get the better of The Heath.

A late rally from the men in black and amber made the scoreline look a little better, but it was Ballyroan Abbey who dominated the game for the majority, and they ran out deserving winners.

Ballyroan Abbey signalled their intentions early, as midfielder Shaun Murphy launched over a point from outside the 45 with barely a minute played. A few minutes later, Diarmuid Murphy shook off the attentions of his marker and landed another score for them, from the right wing.

The Heath's response was swift, as a good move managed to find Evin Keane in space, and he duly obliged with a point from 30 yards out.

They were almost in for a goal soon after, but Andrew Booth's shot was blocked at close quarters, and midfielder Shane Forde just couldn't apply the finish to the loose ball. They would live to regret that miss, as Ballyroan Abbey took control.

MJ Tierney slotted over a free in the 13th minute, and from the resulting kickout, Ballyroan Abbey won back possession and worked it to Scott Conroy, who blasted to the net.

Diarmuid Whelan (free) and Marty Scully added to the tally, and Ballyroan Abbey were now seven clear after just twenty minutes of play.

The Heath were creating chances but some poor shooting, which saw them hit ten wides in the half, kept letting them down.

Ballyroan Abbey almost got a second goal five minutes before the break when Diarmuid Whelan skipped away from his marker and bore down on goal, but JP Nerney managed to stand tall and spoil Whelan's shot, which went over the bar for a point.

The Heath's second score finally came in the 28th minute, as Daithi Carroll curled one over from the left side, but Ballyroan Abbey would finish with a flourish. The ball was worked into MJ Tierney on the left side of the area, and he showed good strength to hold off his marker and blast a shot to the net.

That left them in a commanding position at the break, leading 2-6 to 0-2.

The Heath needed a strong start to the second half and Chris Bergin gave them case for hope with a superb point from the right wing, but Ballyroan Abbey soon quelled any thoughts of an uprising.

First, Shaun Murphy launched over a stunning point off his left foot from out near the left sideline, curling it beautifully between the posts. Then, minutes later, John Rodgers thumped home their third goal from close range, and they now lead by thirteen points.

That sucked whatever competitive element was left in the game right out, with The Heath needing a miracle to get themselves back into it.

They tried to make that happen at least, as they hit three points without reply through Evin Keane (free) and Ciaran Booth, before Daithi Carroll rounded off a move with a powerful shot to the net.

Aaron Carroll tried to settle Ballyroan Abbey down with a good point from range, but The Heath were having their best spell of the game now as Evin Keane (free), James Phelan and PJ Daly whittle the gap down to five.

They frantically went in search of goals in the closing stages, but they just couldn't fashion any openings with PJ Daly hitting two more points, and Ballyroan Abbey held on for the win.