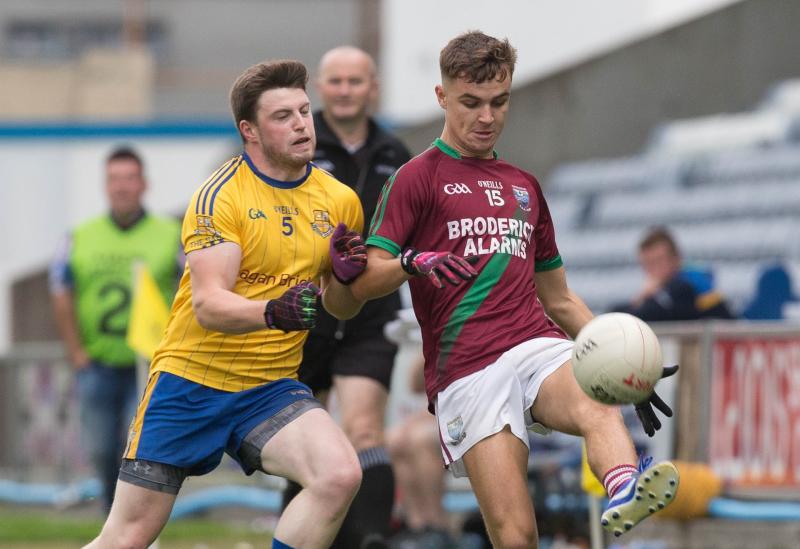 A goal from St Joseph's corner-forward Dylan Doyle set them on their way to a deserved victory over Portarlington tonight in O'Moore Park.

Doyle punished a Portarlington mistake in the 42nd minute in what had been, up to that point, a closely fought affair. Once they had a sizeable lead, however, St Joseph's managed the game superbly and ran out deserving winners.

Portarlington looked to set the early pace, as teenager Ronan Coffey curled over a free with a little over a minute played. St Joseph's took their time to reply, but when they did get going they made it count.

Their first score came from midfielder Brian Daly, as he burst through and pointed from 25 yards out. He then added a free a couple of minutes later to put them ahead, and they would hold that lead all the way to the half time whistle.

Mattie Campion stretched their advantage after good work from Michael Keogh, and then another Daly free had them three ahead.

Portarlington were struggling to break through a disciplined Joseph's rearguard, but they finally made some headway when Adam Ryan hit the afterburners to get himself within shooting distance, and he duly applied the finish.

St Joseph's almost responded in emphatic fashion, as Michael Keogh was allowed to streak in from the left wing, but his powerful shot was met with a brilliant save from Scott Osborne. Dan Dunne pointed the resulting 45.

In spite of Joseph's having the better of the half so far, Port were still only three behind, and two frees from Jason Ward soon had them right back in the mix. Ward and Mattie Campion then traded scores before a strong finish to the half from the Kellyville men.

Mattie Campion landed his third of the half, all of which came from play, and Brian Daly hit another free to see them lead 0-8 to 0-5 at the break.

The second half began promisingly for Port, as David Murphy pointed early on to get them back within two, but St Joseph's eventually hit back with another free from Brian Daly.

Ronan Coffey (free) and Mattie Campion then swapped points to keep three between them, before Joseph's struck for a telling blow. Some poor handling in the Port penalty area saw the ball fall kindly for Dylan Doyle, and he powered a shot to the net for a fine goal.

Port tried to respond quickly, and Jason Ward tapped over a free, but St Joseph's were hitting their stride now. Brian Daly landed his sixth from close range, and then Michael Keogh sprinted through the centre of the Port defence before seeing his powerful shot fly over the bar.

Port needed a goal, and fast, to make a game of it, but they never really looked like piercing the St Joseph's rearguard. Indeed, it was St Joseph's who created the best goal scoring chance in this spell, when Tom Kelly got clean through, but Osborne again produced a magnificent save.

The final score came from Brendan Hickey for St Joseph's, and it put the cap on an eight point win for them.