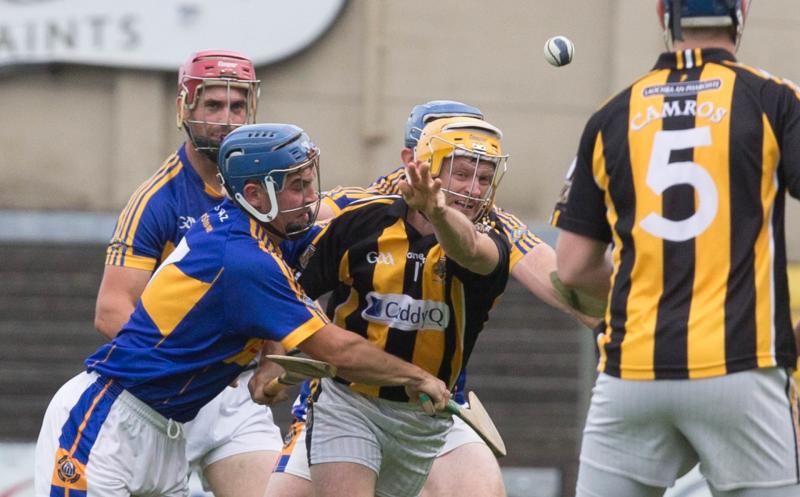 Camross are safely through to the knockout stages of the Laois SHC, as they proved far too strong for Clough-Ballacolla in O'Moore Park this evening.

Coming into the game, Camross were in danger of dropping out of the competition, but in a tight group, the win over Clough-Ballacolla vaulted them into top spot.

In a slow start to the game, Willie Hyland got the opening score inside of a minute from a free. Mark Dowling replied soon after for Camross, but there was precious little quality after that, as neight team could stamp their authority on the game.

Clough-Ballacolla had wind advantage but their shooting was erratic, and Camross took the lead thanks to a long range point from Gearoid Burke in the seventh minute. Another seven minutes would pass before was were treated to another score, this one coming from a Willie Hyland 65, almost 13 minutes after Clough-Ballacolla's first score.

The game needed to see the pace quicken and the crowd brought to life, and thankfully that started to happen after that. EOin Gaughan caught a long ball into the corner and pointed, before Hyland launched one over from midfield in response seconds later.

Clough-Ballacolla started to push ahead afte that, and two points from Picky Maher and another Hyland free saw them three clear.

Camross were unusually subdued up to this point, but finally sprung to life when Mark Dowling kicked the ball into space for Oisin Bennett, and he swept home a first-time shot to the bottom corner.

Camross were almost in for a goal again moments later, but Danny Hanlon made a brilliant block on Eoin Gaughan. Zane Keenan pointed the resulting 65.

Tim Delaney offered a reply to that score with a nice point from the right wing, but Camross had finally found their rhythm now. Lorcan Burke slalomed his way past a couple of attackers before pointing, and then Keenan landed two more frees to see them go three up.

The game was getting a bit tetchy now, with a few off-the-ball incidents having to be dealt with by John Lalor. Clough-Ballacolla managed to hit back before half time, as Robbie Phelan pointed, and Camross lead by just two at the interval, 1-7 to 0-8.

Camross made a bright start to the second half, with Zane Keenan starting to exert some influence. He landed an early free before Picky Maher responded in kind for Clough-Ballacolla. However, Keenan hit back with two more, the first a nice effort from play, and then the next from a free he launched over from his own 45 yard line.

Willie Hyland then won a free and pointed it for Clough-Ballacolla, with Oisin Bennett's first half goal still the difference between the sides.

Clough-Ballacolla just seemed unable to put a run of scores together, and eventually Camross punished them for it. Starting with another Keenan free they went on a run of scores, with Ciaran Collier, Tomas Burke and Andrew Collier all on target to see them go into a 1-16 to 0-11 lead.

Clough-Ballacolla looked a beaten side at this stage, but they put themselves back in the mix soon after. Tim Delaney was found in space 30 yards out, and he got himself to the 21 yard line before powering a shot to the bottom corner.

Willie Hyland added a free moments later and the gap was down to four, but that was as good as it got for Ballacolla. Soon after, Ciaran Collier blocked down Danny Hanlon as he looked to clear the ball, and was left with a simple tap-in for a goal.

Soon after that, Mark Dowling went racing through on goal and fired in their third, and the reigning champions were heading for the knockout stages.