Rathdowney-Errill cruise into quarter-finals with victory over Castletown Gaels 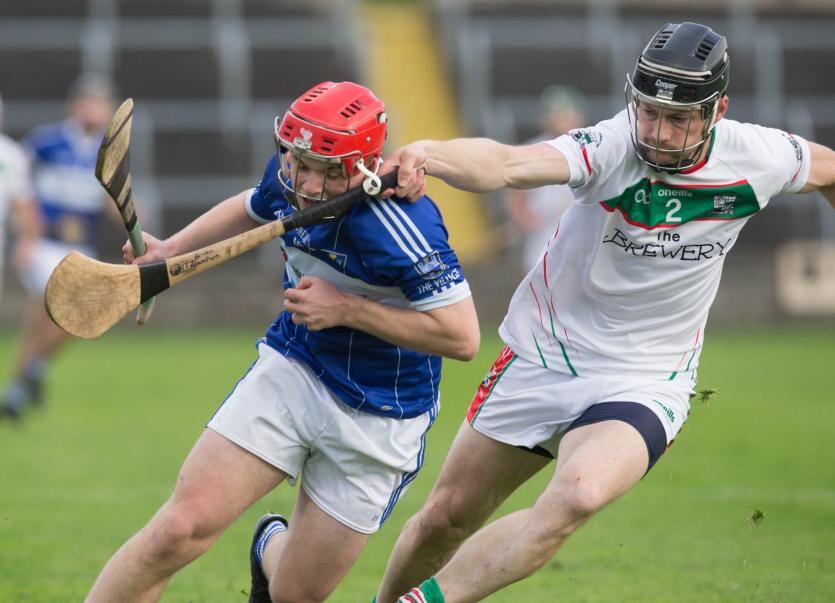 Rathdowney-Errill are through to the quarter-finals of the Laois SHC thanks to a comfortable win over 14 man Castletown Gaels tonight.

Rathdowney-Errill will now play Abbeyleix in the quarter-finals, while Clough-Ballacolla will meet Borris-Kilcotton, as Camross and Ballinakill progress directly to the semi-finals. Castletown Gaels, meanwhile, will meet Ballyfin Gaels in the relegation playoff.

The first half was a lively enough affair, with no shortage of scores. Mark Kavanagh got the ball rolling with an early free, and Paddy Purcell added a second soon after.

Castletown took a little longer to settle, but Ben Conroy landed their first score in the eighth minute, but Rathdowney-Errill responded strongly. James Ryan got his first of the game before Tadgh Dowling split the posts from the left wing, and Rathdowney-Errill now lead by three.

Conroy got another for the Gaels side, but another from James Ryan kept Rathdowney-Errill on the front foot. Castletown were hanging on though, and Brendan Reddin and Ryan Mullaney (free) pared the lead down to one.

Paddy Purcell and Dylan Conroy traded scores before Rathdowney-Errill moved into another gear. Purcell got his third of the half before good work down the left wing from James Ryan allowed him to set up Mark Kavanagh for the opening goal of the game.

Dylan Conroy hit back for Castletown Gaels, but two Tadgh Dowling points and a cracker from the right wing by Mark Kavanagh opened up a seven point lead.

Castletown had a great chance for a goal when Dylan Conroy burst through in the 29th minute, but his pass to Joseph Phelan wasn't gathered at the first attempt, and the ball went out for a 65. Dylan Conroy pointed that, and James Hooban added another, but Rathdowney-Errill finished out the half strongly.

Kavanagh added another free before Dowling hit his fourth of the half, all of which came from play. Dowling then turned provider, as his excellent cross-field ball found Paddy McKane 21 yards out, and his rasping shot flew straight into the top corner, and at half time Rathdowney-Errill lead 2-12 to 0-8.

Rathdowney-Errill kept up the pace on the restart, as James Ryan and Ross King hit early points for them. Conor Phelan offered a reply from Castletown, but they then lost Eoin Peters to a red card, and whatever hope they may have had of a comeback was extinguished.

That was the spark for another Rathdowney-Errill scoring spree, and Kavanagh (65), James Ryan and Ross King all hit the target to see the lead go out to sixteen.

It was grim viewing from there if you were a Castletown fan, as Rathdowney-Errill were ruthless. Ross King and James Ryan added late goals in a dominant display, as they ran out 26 point winners at the final whistle.