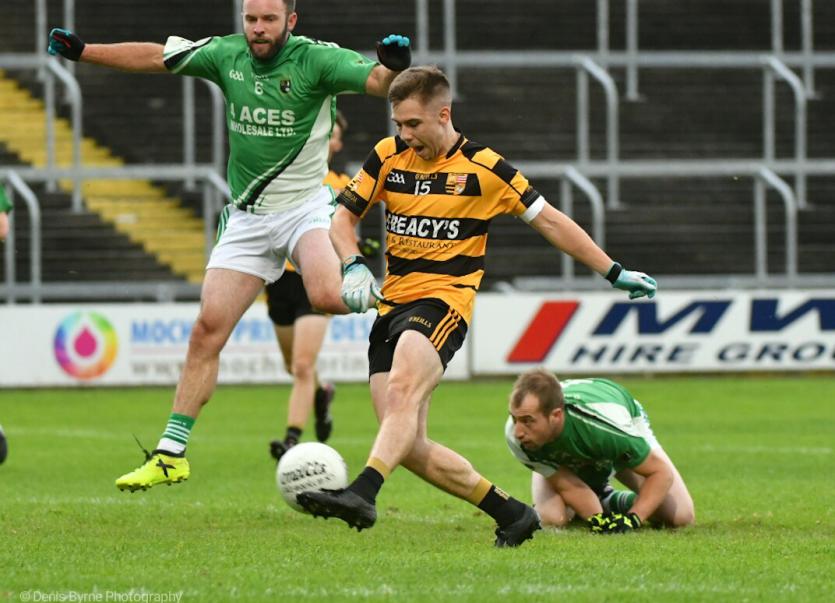 Evin Keane fires in the first goal for The Heath. Pic: Denis Byrne.

A stunning display from The Heath's Evin Keane saw them get the better of Ballyfin Gaels on Sunday night to retain their Laois SFC status for next year.

Keane proved too hot to handle for Ballyfin Gaels on the night, as he accounted for almost all of The Heath's scores in what was a must-win game.

The Heath jumped out of the blocks, with Brian Ging setting up Evin Keane for the opening score of the game with a little over a minute played. Sean Moore, back in the Ballyfin Gaels line up after a summer in the USA, responded with a superb point from the right wing.

Evin Keane then took centre stage for The Heath as he put them in a commanding position. First he swing over a good score from play before adding another from a free, and then he struck for the opening goal of the game.

Slipping away from his marker 35 yards out, he raced through on goal, evading the last defender before placing a left-footed shot into the top right corner of the net.

That score sent The Heath five clear at 1-3 to 0-1, but Ballyfin Gaels responded well. James Moore floated over a wonderful long-range free before David Connolly curled over a fine effort from the left wing to leave the goal in it.

The Heath soon hit back with interest, however, with Keane again supplying the finish. Chris Bergin was the architect of the score, as he won possession on the right wing, cut in along the end line before squaring to Keane, who palmed to the net.

Sean Moore (free) and Colin Nestor traded points, as The Heath looked to keep some daylight between the teams. It was up to Ballyfin Gaels to bring the game to The Heath now, and another Sean Moore free got them within five, but The Heath, and Evin Keane in particular, were hitting some form.

First he won possession 45 yards out, jinked away from his marker and slotted over from just outside the 21, before he landed two more frees to open up an eight point lead at 2-7 to 0-5.

They were looking comfortable now, but Ballyfin Gaels got themselves right back into it before half time when Luke Kerr's low finish found the bottom corner for a goal.

The Heath replied with another Keane point, from a free, but a superb score from Dan Molloy left Ballyfin Gaels just five in arrears at the break, 2-8 to 1-6.

Brian Ging and Sean Moore (free) traded points early in the second half before both teams were reduced to fourteen men when sub Robbie Ging and Barry Roche were shown a straight red cards for an off-the-ball incident.

When play finally settled back down after that, it was Evin Keane who resumed the scoring after another incisive run. Daithi Carroll then rounded off a good team move with a point off his left, and another burst of pace from Keane saw him into space to kick yet another score, as The Heath lead 2-12 to 1-7 with ten minutes to go.

Ben Conroy tried to breathe some life into Ballyfin Gaels with two excellent points from play as the gap was reduced to six. Ricky Quillinan had a half-chance of a goal for Ballyfin Gaels which was saved at his near post by JP Nerney in a frantic finish.

Evin Keane looked to settle any Heath nerves with another point, bringing his own tally to 2-10, before Ballyfin Gaels were then awarded a penalty in the 66th minute.

Sean Moore took it and found the bottom corner, but that proved to be the last act of the game as The Heath hung on.