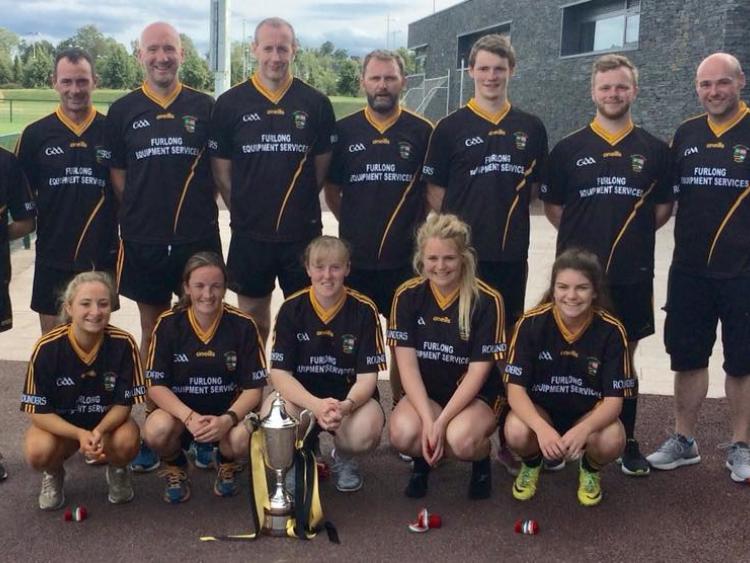 The Heath seniors rounders teams fell just short of completing an All-Ireland treble last weekend, but the mixed team retained their crown with an impressive victory over Glynn/Barntown

Unfortunately for The Heath women Glynn/Barntown just had too much firepower with the bat and sealed their third women’s title in a row. The Heath men fell to an agonizing defeat only losing by one score to Erne Eagles in what was an epic encounter.

First up last weekend was the mixed match between The Heath and Glynn/Barntown of Wexford. The Heath were put into bat after the toss and from there on in they dominated this final.

After fine fielding from Dylan Whitty from Glynn/Barntown and Rory Treacy of The Heath the score after the 1st innings was 8-2 in favour of The Heath.

Despite the best efforts from Dylan Whitty and Kenny O Reilly they just couldn’t live with the champions.

The moment of the game came at the top of the 5th inning where James Kavanagh hit a home run which left Glynn/Barntown with too much to do to pull themselves back into the game.

The Heath players were now in buoyant mood after clinching the first gold of the day but they were to be denied in the next two games.

Next up was the turn of The Heath Ladies against Glynn/Barntown of Wexford. This was always going to be a tough assignment for The Heath ladies and that was the case.

Despite the best efforts of captain Aoife Boyle with great fielding all game, they were unable to deny Glynn/Barntown of winning three in a row. Glynn/Barntown won on a scoreline 15-6

The last final of the day was The Heath men against Erne Eagle of Cavan. This game lived up the expectations and will probably go down in history as one of the greatest finals.

It was nip and tuck all through the game, there was never daylight between either side at any stage.

It came down to the last inning with Erne Eagle needing two to win and The Heath had two out. The pressure was on Hugh Brioday, he held his nerve and got the two scores needed which sparked joyous scenes from the players and spectators from the Cavan side. Erne Eagles won 16-15 in a remarkable encounter.

It was not meant to be for The Heath to win all three but it was a magnificent effort from everyone involved still to bring one gold back to Laois.