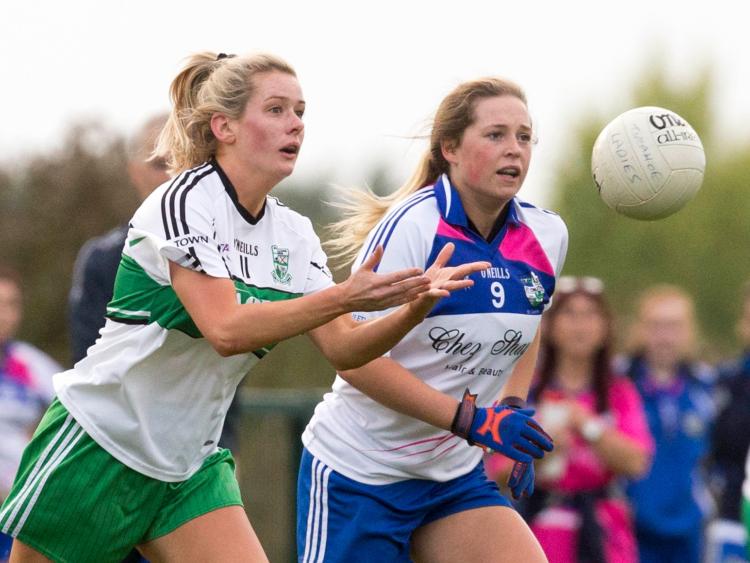 Portlaoise booked their place in the final with a convincing five point victory over St Conleth’s in an entertaining clash in Annanough on Wednesday evening.

St Conelth’s opened the scoring in the first minute through a well-taken point from Sinead Cullen. Six minutes would pass before the next score arrived, and again it was for Conleth’s as Sarah Walsh got on the end of Rachel Cullen’s quick free to double their advantage.

Fiona Dooley set Portlaoise underway with ten minutes on the clock, and their second point arrived thirty seconds later through full-forward Aisling Kehoe. Portlaoise went on to take the lead for the first time when Grainne Moran curled over inside the opening quarter.

A great run from Mary Cotter was finished by Sinead Cullen as St Conleth’s got back on level terms, but it wasn’t to last long as Portlaoise claimed the next three points. Ellen Healy fed Kehoe for her second, Grainne Moran’s excellent cross field pass was finished by Leah Loughman and Moran added her second as Portlaoise went ahead.

Sarah Walsh sent over a free from range, but Moran replied with the aid of the crossbar and Kehoe added her third as Portlaoise extended the gap to four points.

Alanna Havill let fly on the loose ball to raise a white flag and close out the half and reduce the St Conleth’s deficit to three points on a scoreline of 0-8 to 0-5 at the interval.

St Conleth’s picked up where they left off with Eva Galvin laying the ball off for Niamh Cullen to send her effort between the posts, and Galvin provided the assist for their next point too as Sinead Cullen brought them to within a point four minutes into the second half.

Alison Taylor pointed to give Portlaoise a two point cushion, but five minutes later Galvin finished off a fine passing move to narrow the gap to the minimum. Aisling Kehoe landed a booming score from range, but the gap was back to the minimum once more as substitute Naomi Luttrell perfectly measured her effort with twelve minutes to go.

Portlaoise finished strongly with Ellen Healy continuing to put in an inspirational display, as she had done from the opening whistle. Aisling Kehoe sent over a brace on the fifty minute mark, and ten minutes later added another pair to bring her tally to eight for the evening as Portlaoise booked their place in the final.