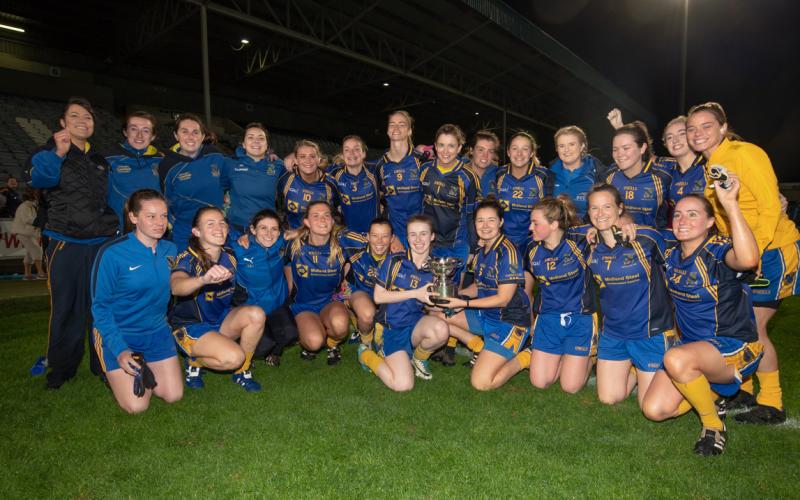 Champions Sarsfields went head-to-head with Portlaoise in the senior final for the third year running, and despite Portlaoise giving a much improved display in contrast to last year, Sarsfields once again went home with the silverware.

Full forward Tracey Lawlor made all the difference in the first half for Sarsfields, as she struck six of Sarsfields eight points, while Portlaoise only managed a solitary two.

Portlaoise set up defensively from the outset, and it reaped somewhat of a reward in the opening stages, as they held Sarsfields scoreless for six minutes. Lawlor was forced to nail a long range effort from a placed ball to kick-start proceedings. She placed over another a minute later from a closer distance, before kicking her first from play.

Portlaoise needed someone to give them a lift down the opposite end and Aisling Kehoe answered the call, as she charged through several Sarsfields tackles to score open Portlaoise’s account. Alison Taylor followed up for Portlaoise’s second, but they would fail to score for the rest of the half, as Lawlor and Sarsfields dominated.

A bad kick-out from Portlaoise resulted in quick inter-changing play between Amy Loughman and Tracey Lawlor, with Lauren Kearney sailing one between the posts. Lawlor then landed a stunning point, which was shortly followed with her third free of the evening.

Portlaoise did finally retrieve a bit of possession after that, but they failed to show any composure up front, and Sarsfields capitalised on the sloppiness. Substitute Clare Conlon was sent on with only twenty-four minutes played, and she made an instant impact. She sold a deft dummy, and found the target from an acute angle. Lawlor pointed her fourth free and sixth point of the half to bring it to a close, as Sarsfields looked unstoppable.

Things didn’t look any different at the beginning of the second half, as Portlaoise struggled to find any way out of their half of the pitch. It did take five minutes, but Lawlor score her last point of the evening through a placed ball, as Portlaoise did a much better job containing her after.

Portlaoise’s wide count continued to grow in the opening stages of the new half, as thirteen minutes came and went before they returned to the scoreboard. Grainne Moran slotted over a free, before Amy Byrne also hit the target for Portlaoise. Despite being out-played for most of the contest thus far, they only trailed by five with fifteen minutes remaining.

Ciara Burke kept her side ticking over, but Sarsfields fell into a complacent way of thinking in the second half, and allowed Portlaoise to keep in it. Grainne Moran once again reduced the gap to five with six minutes of normal time left, but you got the feeling Portlaosie needed a few goals to turn this one on its head.

Lorna O’Sullivan scored her first at a critical time for Sarsfields, as they looked to see out the rest of the game. Defender Rebbeca Reddin hit back for Portlaoise, as their search for a crucial goal looked to have hit a dead end.

With the last kick of the game, Aisling Kehoe went for the jugular, but her shot blazed over the crossbar. Sarsfields now go on to meet the Kildare champions in the Leinster Club SFC on September 30.