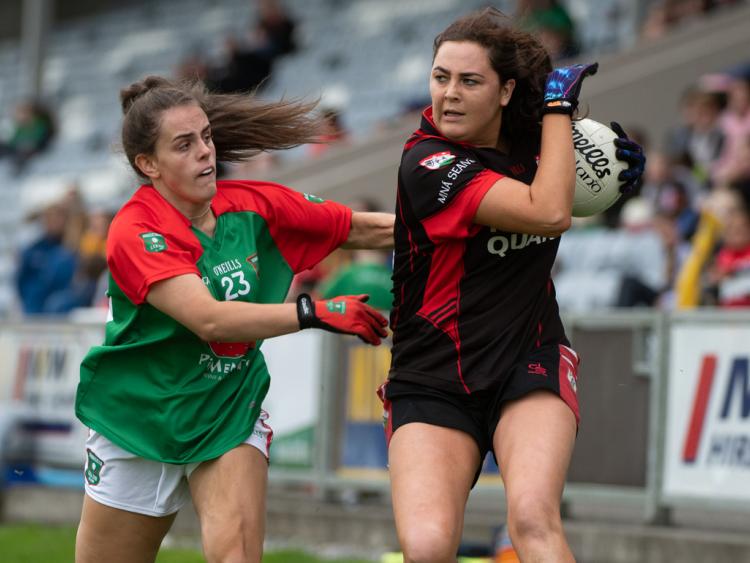 After suffering agonising defeats at the hands of St Conleth’s in 2016, and Park-Ratheniska in 2017, Shanahoe were desperate to finally get their hands on the Intermediate trophy this year and return to senior ranks, and they managed that with a comfortable final victory over Graiguecullen.

Graiguecullen almost snuck in for an early goal. Caoimhe Fitzpatrick fed Courtney Forbes, but Eimear Barry stood up bravely to the shot, and Shanahoe cleared the danger. Mary Griffin opened the scoring for Shanahoe, with centre-back Marion O’Grady following up with her teams second.

Graiguecullen got on the board after five minutes after some serious running power by Courtney Forbes resulted in a free, with Aoife Nolan placing over. Shanahoe nearly found the net soon after, as Noirin Kirwan’s shot from distance came off the upright, and fell to Laura Finlay. She saw her shot well saved by Chelsie Nolan, but Finlay kicked it over the bar at the second opportunity.

The two girls wearing number fourteen on their back, Aoife Nolan and Margaret Fitzpatrick, exchanged scores, before Caoimhe Fitzpatrick pointed for Graiguecullen after an accurate Chelsie Nolan kick-out.

This left Graiguecullen only behind by the minimum, but that would be as close as they would get, as Shanahoe took control.

Mary Griffin slotted over a nice free, before Shanahoe scored the only goal of the game. A nice delivery from Kate Jacob was received by Finlay, and she slid low into the corner of Chelsie Nolan’s net.

Mary Griffin added another free, before Aoife Nolan replied with a placed ball for Graiguecullen, as they trailed by five at the interval.

Solid build-up play involving Megan Walsh and Mary Griffin at the start of the second half meant Laura Finlay had time and space to fire between the uprights. Aoife Nolan replied for Graiguecullen with a point, but that would be the last score of the game for the Carlow-border side, as they failed to convert good defensive work into attack.

They had plenty of possession, but it was Shanahoe who possessed that experience and clinical nature. Noirin Kirwan scored the first of their last three points, as the superb Laura Finlay fired the second over after a further five minutes elapsed.

Kirwan grabbed the last score of the game for Shanahoe. Both sides had goal chances in the remaining few minutes, but neither could hit the back of the net. Christine Middleton snuck in at the far post unnoticed for Graiguecullen, but palmed straight at Eimear Barry.

For Shanahoe, Allana O’Rourke intercepted a Graiguecullen free, gave it to Noirin Kirwan, but she dragged her shot wide of the post.