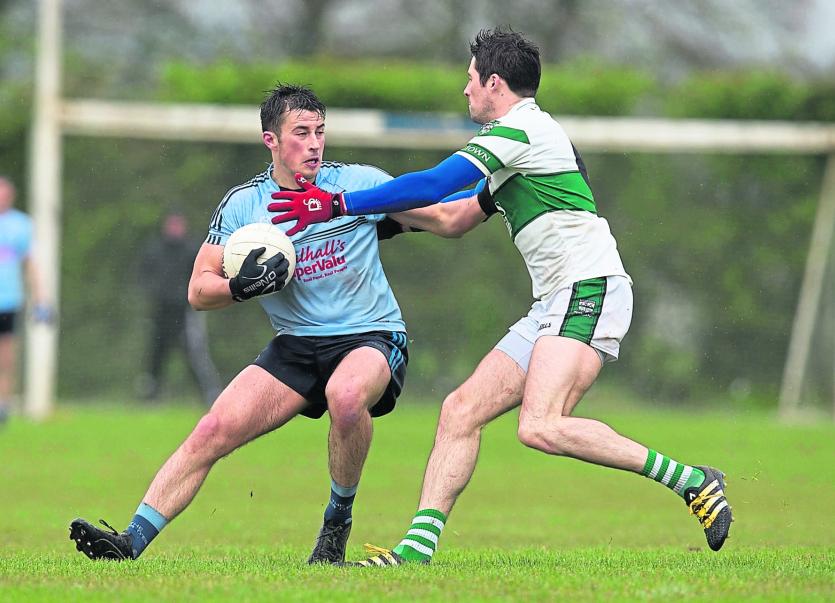 Conor Brennan and Conor Boyle in action in a league game earlier this year.

The Portlaoise juggernaut rolls back into O'Moore Park this Sunday, with Ballyroan Abbey the latest team to try bring it to a shuddering halt.

You'd forgive them for being a little daunted by the challenge, as there is little in recent form to suggest that Ballyroan Abbey are in a position to compete, or even beat, Portlaoise.

So, the question to be answered is whether they have developed enough this year to give themselves a chance? At times, they have appeared to be on the right path, but are not consistent.

We saw the best and worst of them against The Heath, as they raced into a big lead, but almost threw it away in the last twenty minutes. They lead by thirteen points early in the second half and were clinging on at the end, winning by just three after mentally checking out in the second half.

That lapse in concentration is what makes you worry for them so much this weekend, because for all the obvious football ability Portlaoise possess, it is the speed at which they play that flummoxes their opponents so regularly.

They force teams to react quicker and concentrate more closely than they are typically used to, and if Ballyroan Abbey are to make a game of this, they'll have to be extremely diligent.

They also have to try play to their strengths. They have size and strength in midfield, but that's no good to them if Graham Brody is taking short kickouts and running the ball from deep.

The Ballyroan Abbey forwards will have to be alive to that. Indeed, it is in the forward line where Ballyroan Abbey appear to be at their strongest, and they have the players there to cause teams trouble.

Diarmuid Whelan has size, strength and scoring ability, MJ Tierney is arguably the best freetaker in the county, Scott Conroy is a clever and potent forward and Padraig McMahon brings pace and experience to the half forward line, something which helps them break forward at pace when the chance arises.

They are all positives for Ballyroan Abbey, but their defence will be under massive pressure. They have conceded 14 points in all of their four games so far, and if they can keep Portlaoise to that number on Sunday they will have done well.

Brian McCormack's display against Graiguecullen will have given them plenty of food for thought though, and despite his advancing years, he shows no signs of diminished ability.

In a ten minute spell against Graiguecullen, in the run up to half-time, he scored 1-6. Graiguecullen had been doing well up to then, keeping themselves in striking distance, but McCormack ended the game as a contest almost single-handedly.

While he doesn't move at the same speed, his mind never slowed down, and he is still the best player in the county for creating space for himself and others close to goal.

Ballyroan Abbey may well be tempted to sacrifice Padraig McMahon in attack and send him back to do a man-marking job on McCormack, or Paul Cahillane if he is fit, but that weakens them further up the field.

Teams have tried to sit deep, funnel players back and stifle the Portlaoise attack, but it never really works. Portlaoise will find a way through if you give them enough time to probe your back line.

What McCormack's scoring spell against Graiguecullen also showed is the cruel fate teams face when playing Portlaoise - to beat them, you have to play your best for a full hour, but for them to beat you, often they only need to be at their best for ten minutes or so.

Ballyroan Abbey need the performance of their lives if they hope to get a result this weekend, and while they are an improving team, it's hard to see them doing enough to seriously trouble a team as well-drilled as Portlaoise.

No doubt there are better days ahead for Ballyroan Abbey, but for now, this may be an up-close tutorial for their young players on what it takes to be competitive at the top level of the Laois SFC.