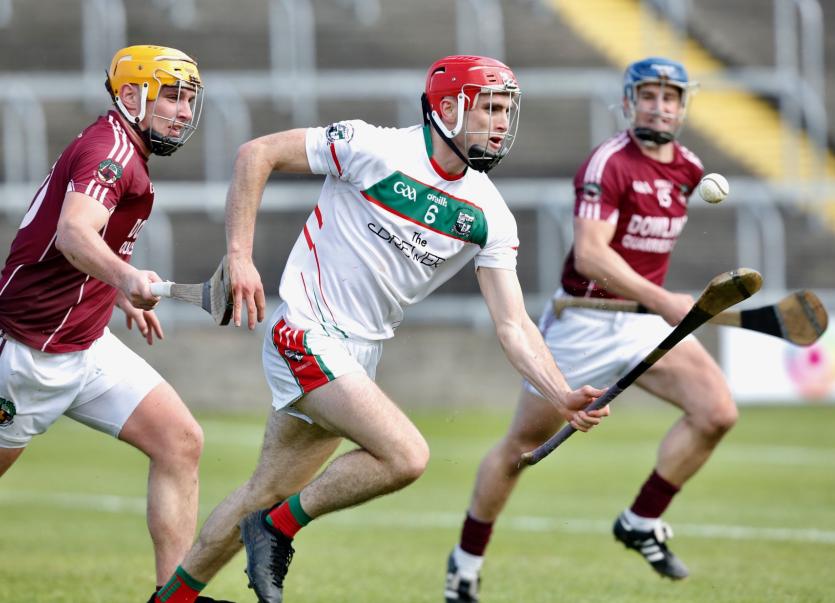 Rathdowney-Errill are through to the Laois SHC final after overcoming a determined, well-drilled Ballinakill side in O'Moore Park on Sunday afternoon.

With just a point separating the teams at half time, this one looked like going to the wire, but Rathdowney-Errill moved through the gears midway through the second half to secure the victory.

Making a strong start, Eamon Jackman had Ballinakill ahead with a little over two minutes played when he floated a free between the posts. Rathdowney-Errill had a strong wind advantage in the first half, but a dogged Ballinakill performance meant they struggled to pull ahead.

Jackman added a second point from play moments later, a good score from the right wing, as Ballinakill set the early pace. Mark Kavanagh eventually opened the Rathdowney-Errill account from a free, but another Jackman free kept Ballinakill ahead.

Those opening minutes had been a niggly affair, with plenty of off-the-ball incidents, but the play finally settled down after that. A second free from Kavanagh and a point from Ross King drew Rathdowney-Errill level, but a long-range Brian O'Mara effort had Ballinakill 0-4 to 0-3 ahead at the midpoint of the half.

Paddy McCane then created space for himself in the left corner to level the scores for a second time, and then Jackman (free) and Paddy Purcell both pointed for either side.

Rathdowney-Errill had their best spell of the half after that, starting with a point from Joe Fitzpatrick. John Purcell then made it three in a row with a lovely score from the right wing, and James Ryan had a great goal chance in the 28th minute, only to see his effort flash over the crossbar.

Those four points in a row made it 0-8 to 0-5 to Rathdowney-Errill, but credit to Ballinakill, they cut into that lead in first half stoppage time. Eamon Jackman pointed a 65, and then with the half almost finished, MJ Dunphy came up from corner-back to leave just one in it at the interval, 0-8 to 0-7.

That was quickly canceled out on the restart thanks to Cha Dwyer, with Paddy Purcell managing to squeeze a shot off a minute later to edge his team back in front.

The close nature of the game remained, however, as Eamon Jackman was fouled in midfield and duly split the post, the teams now level at 0-9 each.

The game was there to be taken control of, and it was Rathdowney-Errill who made the first move, and fortuitously so. The ball broke to Paddy Purcell in the penalty area, and his shot took a deflection and looped into the far top corner.

Rathdowney-Errill made the most of their good fortune by pressing home their advantage, as Ross King, sub Brandon McGinley and Mark Kavanagh (free) all pointed to send them six clear, the biggest lead of the game so far.

Ballinakill captain John Walsh tried to settle his team back down with a good long-range point, but Mark Kavanagh canceled that out with a free. Tadgh Dowling then made it a seven point lead with a good score from 35 yards out, and with five minutes to go, it was up to Ballinakill to make a move.